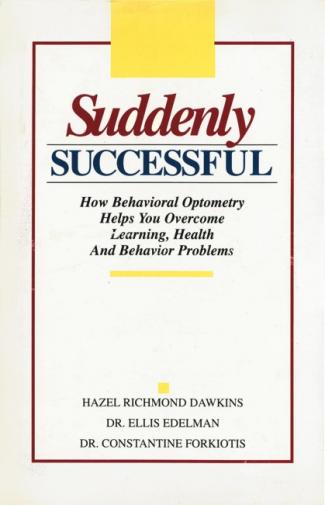 One word: mind-boggling. Anyone with eyes should read it and honestly I had some problems curbing my enthusiasm. Having discovered about Vision Therapy through the internet and Susan Barry’s 2009 publication ‘Fixing my Gaze’ which is equally mind blowing and emphasizes the beauty and advantages of having stereovision and the brain processes involved in acquiring it for people with long standing strabismus as myself, you would think this form of life changing treatment is fairly new. Well, nothing is less true… This 1991 publication totally bursts that bubble. 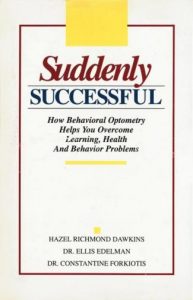 The main author of ‘Suddenly successful’ is Hazel Richmond Dawkins. A seasoned writer who was legally blind in one eye for fourty years due to amblyopia before finding out about behavioral optometry. She must have been so astonished that no doctor had ever told her about this ‘simple’ low tech cure called vision therapy that she researched the topic to its core. Sounds familiar… She was helped by two optometrists writing this book. This accessible yet profound publication links perfectly detectable and treatable vision imbalances to learning disabilities (concentration problems, reading problems, dyslexia, ADD, …), juvenile delinquency, psychiatric problems (schizophrenia, depression, alcoholism…) and chronic health problems (migraines, headaches, muscle aches, balance problems, travel sickness, tension, light sensitivity, teeth-grinding,…). This is done in a convincing fashion with referenced facts and anecdotes. Optometric vision therapy will not rid us of all such problems, but it will be effective when problems are related to the way your visual system works or rather malfunctions.

The numbers mentioned when talking about criminality and reducing recidivism with optometric vision therapy are downright spectacular. ‘The success rate for reducing the level of recidivism in the United States is not high. The norm for re-arrest is 50 to 60 percent. … A six year follow-up study of over 500 juveniles showed the re-arrest rate went from 45 percent to 16 percent. Findings from the programs supported earlier studies made by optometrists David Dzik of Tennessee, Roger T. Dowis of Colorado and Joel Zaba of Virginia. … As this federally funded study has shown, learning problems and antisocial behavior change after optometric vision therapy. Once some harmony and balance exists in the vision system, then the youngsters can begin to benefit from traditional education.’

The chapter about psychiatric health in relation to vision problems is no less spectacular. When visual development gets derailed at one point without proper treatment this spills over into other brain functions and manifests itself in all kind of ways. Every millisecond the brain receives 3 billion impulses. One billion from one eye, one billion from the other and one billion from the rest of the body. Half of the brain is involved in the activity of vision. This doesn’t only involve eye sight but also how your eyes function in relation to the rest of your body. The role of vision development in overall brain development and mental as well as physical health is substantial. When the vision system is brought out of balance as an adaptation to environmental or physical factors the whole brain is affected. By correcting this imbalance by appropriately stimulating the vision system by means of optometric vision therapy a negative down turn can be avoided and instead cause a positive domino effect that can transform the entire brain along with its owners performance and quality of life. 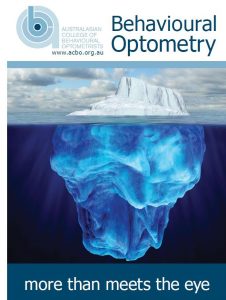 Further the book provides a history of how and why ophthalmology, orthoptics and behavioral optometry have grown apart. It’s a sad example of how the best idea or best practice does not always become the norm. I quote ‘Any attempt to compare orthoptics with optometric vision therapy is like comparing the Wright Brothers’ aircraft with the space shuttle. Both are forms of transportation, but they are light years apart in concepts and results. So it is with orthoptics and optometric vision therapy. The concepts, practices and results are radically different (cure as opposed to no cure).’ This book was published one year after I was born and written even earlier, and still to this day eye care is dominated by primitive methods providing poor results. Strabismus hits about 4% of the population and it is  curable in the majority of cases even though many ophthalmologist resist the cure till this day causing sorrow to millions. Sadly, the story doesn’t end with those 4%. About 20% of the population, or 1 in 5 people, suffer from a less visible vision imbalance (phoria: eyes sometimes deviate instead of tropia: eyes deviate at all times) impeding them from living freely and up to their potential. This manifests itself with a myriad of symptoms which sometimes don’t even seem to be eye related. Yet, the majority of cases go untreated. Incomplete vision screenings testing only eye sight at about 10m distances (as opposed to a comprehensive vision exam testing at least 21 visual skills) along with misconceptions amongst many ophthalmologists are the biggest obstacles to overcome in order to get the eye care you need. Often the ones in need are children who can’t express the problem and can’t look out for themselves… Or adults with reading problems, often in pain, who almost have to become optometrists themselves in order to find a solution to their problem. This book stated the problematic situation in 1991 and apparently it wasn’t even a new problem back then. How the hell is this possible? Who is holding these people accountable? It’s outrageous, since making comprehensive eye examination mandatory has significant capacity to expand human potential and improve society as a whole.

Throughout the book many vivid stories demonstrate the science and how much work is still to be done to get behavioral optometry universally accepted. One of the anecdotes tells the story of Luci Baines Johnson, daughter of the then US vice president, who had consulted all kinds of physicians, psychiatrists, ophthalmologists, educators to no avail. Finally she and her parents ended up consulting Janet Travell MD, President Kennedy’s personal physician, who suggested it might be a vision problem that is keeping her from performing adequately and living a healthy life. After being treated by a behavioral optometrist, she became a enthusiastic advocate of optometric vision therapy. “If my family, with its wealth and power, could seek so long and unsuccessfully for the right answer to my problem, how many others throughout our country seek this help? … The key to a better society is education, the key to a better education is better vision. If you don’t have that key, you can’t open the door to a better life.” Luci Baines Johnson.

Amidst all the calamity it is also shown that even people with high performing vision systems who don’t experience severe problems can benefit from optometric vision therapy. Top athletes use sports vision training to give them that extra edge to compete. Testimonies illustrate how Olympic hockeyplayers, volleyball players and others improved their overall performance with vision training.
‘Compensating for a visual deficiency by relying on another sense takes its toll as competition becomes tougher. By the time an athlete reaches the Olympics, the split second it takes to compensate for a visual deficiency may mean the difference between a gold medal and sixth place. … The four (Olympic) volleyball players who received the extensive vision care had hitting percentages in the 20 percent range when vision sessions began. After the therapy, their hitting percentages moved to 40-50 percent.’

Aside from giving you a broad yet insightful idea of what kind of vision imbalances (astigmatism, nearsightedness, farsightedness, strabismus, lazy eyes or often a combination) there are and exactly how optometric vision therapy and the right motivation can cure or improve them, this book puts you on your way to finding a behavioral optometrist practicing optometric vision therapy (pre-internet) for a comprehensive eye exam. Last but not least, some practical tips to stimulate visual development in children and adults are provided. Reading this book can greatly benefit you and others around you.

Related articles on this blog:
– Visual Impediments to Learning: What’s it going to be? Your health or your education?