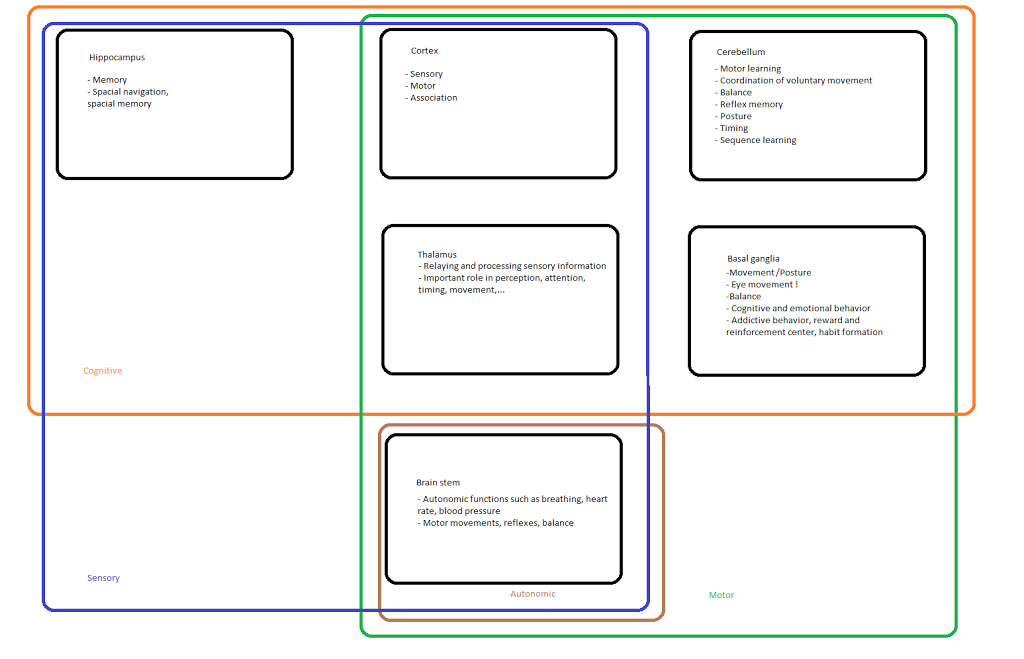 I admit this is DIY brain science, although putting together the information I found on the various brain areas described in Part 1 was very eye-opening to me. That’s why I made a schematic overview of the information listed earlier and categorized them into functional groups. This schedule has many deficits in being simplistic, incomplete (because actually at least 50% of the brain is involved in visual processing) and not adequate in conveying the true complexity of the holistic brain. Nonetheless it makes up for those flaws by illustrating  in an easy intuitive way why binocular vision problems affect so many, if not all, brain functions and every aspect of life. Eyes that are not teaming correctly are like an open loop in the brain making for a lot of lost energy and personal potential on the one hand, and heightened susceptibility to a variety of psychological and neurological disorders on the other hand. How a person with a visual disability experiences his problem varies because each person with a brain abnormality or injury has uniquely affected areas so the real life examples given below might not apply to every single case. However it is generally true that customized vision therapy can considerably increase personal potential and quality of life of a visually impaired patient by structurally reversing this downward spiral in the brain.

In the picture the six brain areas described in detail in Part 1 are divided into overlapping functional groups: autonomic, sensory, motor and cognitive. In an another previous post I mentioned that vision imbalances are not a cause but rather a symptom of deficits in the function and performance between two major nerve systems in the body: the autonomic and motor nerve systems.  Now, by taking in the additional information that eye movement is administered by the basal ganglia and thalamus in close collaboration with brain stem,  cerrebelum and cortex we get a first gimps of how massive the influence of incorrect visual development is. An initial imbalance in the basal ganglia itself can affect balance, posture, cognitive, emotional and addictive behavior. Furthermore does eye misalignment disrupt the received sensory input and its processing affecting sensory experience, concentration, memory and motor skills further down the line. Over time a negative brain wide spill over effect will eat away at overall performance. In her book ‘Fixing my gaze’ Susan Barry states that according to her own personal experience stereo vision isn’t just another way of seeing but that it is truly another way of thinking! Vision cannot be isolated from cognition or any other brain function so correcting a visual imbalance through appropriate training has far reaching positive effects on the brain as a whole.

Plenty of life experiences can illustrate my analysis.
– Getting ‘ more stupid’: When going to university I still suppressed one of my eyes as an adaptation to my long standing strabismus. I was so convinced I needed to succeed that after one semester of relentless studying I actually broke through my suppression. Panicking, I went to my ophthalmologist asking him for help and he said the only thing he could do is operate. In my ignorance I let him, embarking on a long journey of suffering lasting up until this day. In the meantime I kept studying, being of the opinion that I shouldn’t let my life be ruined because of other peoples mistakes. I kept passing exams… However there was a big price to pay. On paper it might have looked like I was getting through my studies and ‘getting smarter’, but in reality I was getting stupider. Gradually I was losing my ability to focus, to read properly and ultimately to function normally. So in the end they still managed to ruin my life, but it’s never too late as they say… (Thalamus)

– Having to relearn many things: After that badly executed surgery at age 18 resulting in horrendous double vision, I had a very hard time relearning everything. Learning how to walk, how to navigate, how to drive, how to everything… I did relearn all those things quite fast but not to the former level… yet. 🙂 The surgery had actually restricted eye movements so I could not freely adjust them to go back to my old strabismic habits, even though there was no new system either. I lost a lot of control over my eyes in that surgery and mostly my recovery is about overcoming that surgery more than the initial strabismus. (brainstem, cerebellum, hippocampus, thalamus,…)

– Burn outs: After a few years of trying to live with the double vision and the additional problems created by the surgeon while at the same time trying to live a normal life as a student, I eventually had trouble coping and burned out two years in a row leaving me utterly exhausted for months. Fortunately this led me to think out of the box and look for another long overdue solution in English on the internet: Vision Therapy. (brain stem, cerebellum, hippocampus, thalamus, cortex,…)
– ‘Shock therapy’: By miraculously graduating I had promoted myself from student to ‘most wanted villain’ it seemed. My parents had forgotten about my troubles they weren’t able to relate to begin with. Not knowing anything about the problem or having ever done anything to help me after I got messed up even more by the surgeries, everyone felt very in place to give me advice and even get angry at me for not being able to do anything anymore. After losing a visual comfort zone years ago, I also lost a geographical one. This emotional shock of realizing that I had no home and recovery, if even possible, was at least two years away made me lose months of recovery. The results of that unnecessary brain shock, I still feel today. It’s easy to destroy and hard to rebuild. Ignorance and intolerance kill. (basal ganglia, brainstem, thalamus, …)

– Motor problems: I used to be a great runner. After all that happened and the recovery sucking up all my energy, I just can’t do it anymore. I take small walks now. I don’t go far and when I do go somewhere knowing there won’t be much of a plan B to get out of the situation I’m scared of ‘imploding’. I’m 23, but often I feel like 83.  (motor group)
– Not being able to react to situations: When all this went down I tried to explain to a sympathetic friend how all this fear and stress in combination with the long standing vision problem was affecting me. I said something like: ‘I know I’m here right now and I’m here with you. I’m comfortable because I know this house and I know you. But if something slightly unexpected were to happen I would perceive it but wouldn’t be able to react. I realize what is happening but I’m not able to react to what is happening. I can perceive the situation but I don’t feel like I’m really part of it. It’s like there is a short circuit in my head.’ He said: ‘Jesus, sounds like something I read about dementia.’ An interesting article that provide more insight of what might be going on up there appeared on the Vision Help blog:  http://visionhelp.wordpress.com/2011/05/22/sensorimotor-dynamics-and-two-visual-systems-shades-of-skeffington-brock-part-1/ . (thalamus, brain stem, cerebellum, basal ganglia, … )
– ‘Locked in’: This brain issue has taken over my life and everything I do is in order to recover. I can’t go where I want, can’t read all I want, basically I can’t live my life… But I’m working my way out now and if everything remains to be on an even keel I will succeed. Achieving stereo vision will eventually reverse the downward spiral and enable me to get better. (sensory, motor groups)

– The harder you fight it, the worse it gets: Binocular imbalances clearly put a lot of strain on the brain and body and the harder you fight it by not accepting reality and not correctly treating with Vision Therapy the more damage will be done. It’s wise to accept the situation (if you are not misinformed by MDs and if people let you) and work on your vision in order to close this energy wasting ‘brain leak’. After you can get back to other things you want to do in life. Ignoring this problem doesn’t last. A person divided against himself, can not stand.

– Sensibility to sound: Some strabismics compensate very strongly for visual impairments towards audio processing. I’m a good listener and I can quite easily pick up languages auditively with some extra visual learning. Sadly some people have reorganized their senses in such an extreme way they are oversensitive to sound and suffer because of it. An example can be found here. (thalamus, sensory group)

These are just a few illustrative experiences of how strabismus or other visual trauma can affect the brain and why treating with Vision Therapy as soon as possible is imperative in order to limit and repair the damage. Vision, even though often taken for granted, is a learned behavior and can be improved through training according to the principle of neuroplasticity!

Finally, I want to end with a remarkable excerpt from  ‘The Brain that changes itself’ by Norman Doidge pointing out once more the profound implications that vision problems and whether correctly treated can have on a persons brain and consequently his overall development, performance and health status.

Michael Merzenich continues to challenge the view that we are stuck with the brain we have at birth. The brain is structured by its constant collaboration with the world, and it is not only the parts of the brain most exposed to the world, such as our senses, that are shaped by experience. Plastic change, caused by our experience, travels deep into the brain and ultimately even into our genes, molding them as well.