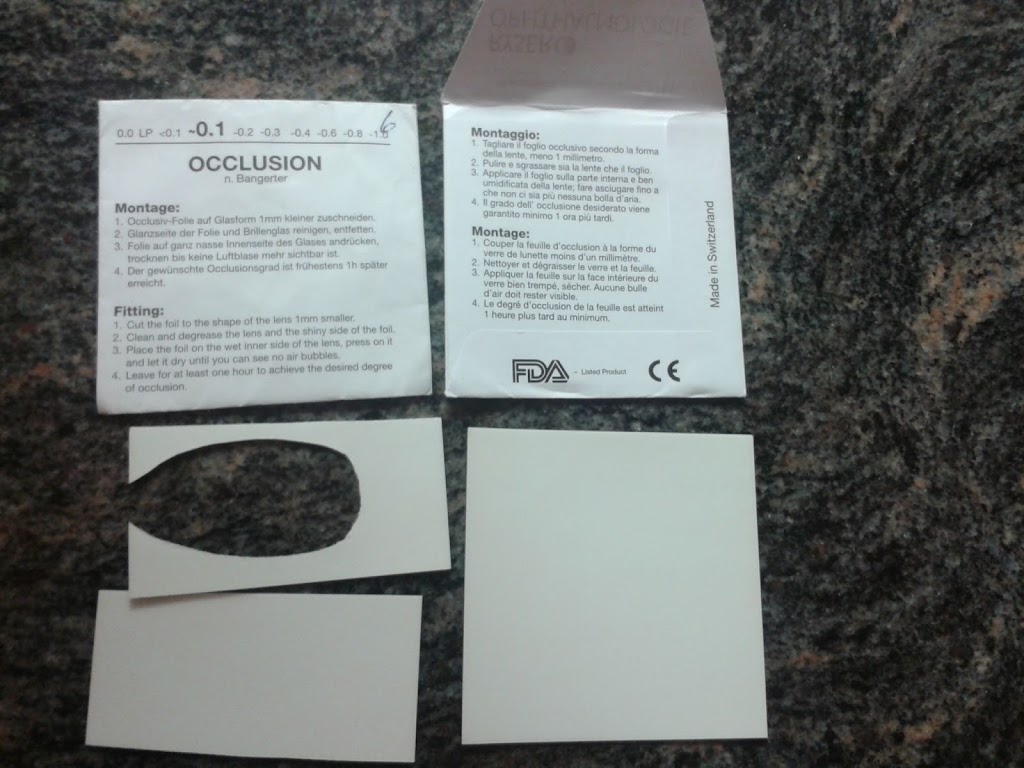 By the end of the month I will have reached a total of a thousand days (2 years and eight months) of visual training and counting. I admit some days I am really getting anxious and impatient about wanting to see even the slightest bit of stereo. On the other hand I have to remind myself, aside from being twenty years behind on schedule, I’m pretty much on schedule given the circumstances under which I started out on this mission. Thinking back about how after the surgeries the angle of my visual axes uncontrollably varied while trying to track an object, about how I couldn’t even hold a stable gaze so let alone align my eyes, about how I had double vision 24/7 and about how utterly hopeless the situation seemed my current state is already light years removed from that. More than one mountain has been moved to get to this point. According to my optometrist I have already exceeded his expectations various times but if you ask me this ain’t over until it’s over. Unless I’ve experienced some stereo vision, I haven’t changed anything structurally.

Having read various case studies or success stories of people with similar histories it seems to me that 3 years is the period of time often quoted to overcome their affliction. Having come this far already this is actually good news. I’m going to try forget the fact that I’ve been doing this for a 1000 days now and take on the last stretch with the same boundless motivation I set out with. A lot of things have changed and happened during that time but it doesn’t matter. As long as I can get the this thing done nothing is lost. After all, it must be right around the corner about now. No time to start diminishing efforts. Once more, I’ll be and remain Mr. Pragmatism.

I started rethinking my current visual situation. What remaining barriers are holding me back from acquiring stereo vision?
– My left, traditionally amblyopic, eye is still lacking a bit of speed in its movements to really be a swift part of the binocular team. Mind you, compared to my starting point a thousand days ago it’s already quite supersonic but it’s not sufficient yet. (Motor fusion)
– I am aware of both input streams coming from each individual eye but I don’t feel they are reaching the same space in my head and add up. Subjectively I feel like the two input streams aren’t merging yet although I can superimpose them by aligning my eyes. It’s like trying to mix two distinctly coloured fluids but instead of getting a true mix of both colours (a new third colour), I just get an unstable ensemble of the two initial colours in one flask. Even though the input from my left eye is never completely absent, the overall impression while using red green anaglyph glasses is that the right eye is still quite dominant. (Binocular rivalry, no luster fusion, partial suppression, limited sensory fusion)

Notwithstanding the fact that I am to some extent binocular, there is still a power struggle going on between both eyes or more correctly stated the neurological setting behind them. I’d say my left eye counts for 30% of vision while the right eye takes on the other 70%. But what’s worse, the left side of things (but the right hemisphere of the brain) isn’t involved enough to have proper binocular summation. That’s the core problem even after all this time. So I’m going to shake things up.

1. In a previous blog entry I once mentioned that I applied RYSER filters on my glasses to blur out vision coming from my right eye in order to put my amblyopic left eye in the drivers seat. That entry was a year ago. Back then, I couldn’t sustain this kind of situation very long for several reasons. Long story short, I experienced it as too exhausting and hence destructive overall. Now however I think it might be the ideal tool to push me over the edge.

It’s still pretty tiring but now I feel like it is, instead of destructive, very effective. It really forces my visual system to adapt and makes both eyes change roles. Important to note is that I do not occlude my right eye completely which would take away all binocular stimulation. This way of partial occlusion puts my normally dominant eye in a disadvantage making the left eye take the lead for a change while light is still entering both eyes.

2. I’m going to do another four weeks of intensive 30 to 40 minutes of syntonics a day. I’ve been doing it before and it accelerated my ocular movements among other things. I stopped doing it for a while because of diminishing effects and circumstances but I’m going to do a second round.

Along with my ‘usual’ VT routines this is going to be my renewed offensive the upcoming month. It’s a little more ‘aggressive’ but I think it might pay off at this point in time.