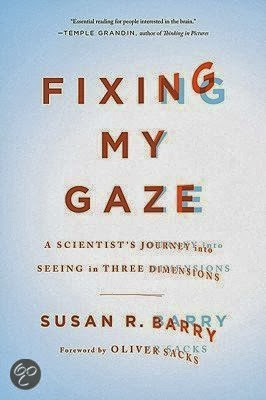 After I read ‘Fixing My Gaze’ for the third time in three years I decided to write a long overdue review about the book that got this whole VT party started. I first read it during the summer of 2010. At the time I was undergoing all kinds of personal, academic and medical crises and I realized I was on my own. So I turned to the oracle that is Google and went looking for better alternatives to help me get rid of my double vision. This time in English. I discovered Vision Therapy. I was already flabbergasted by this whole new universe of useful information on vision therapy related websites which I was reading with great effort. Then I found out about a book called ‘Fixing my gaze’ and watched some Youtube videos by the author of the book named Susan Barry. So… THERE IS A SOLUTION NO ONE HAS TOLD ME ABOUT?! Aside from the cerebral double vision short circuit all kinds of fireworks were going off in my brain. The situation was bleak but now there were new elements to consider. Quickly I ordered the book and when it arrived I read my way through it in a less quick post-op double vision strab kind of style. This book contained the information I had needed ever since my eyes started crossing at the age of three and it was clear I would have to do whatever it takes to make things right again despite of the twenty year delay and medical mishaps. Denying the information in this book, as some ‘VT critics’ seem keen on doing, should be listed as a criminal offence. After all, the book only talks about healthy visual brain development and has the endorsement of two Nobel prize winners on the back… 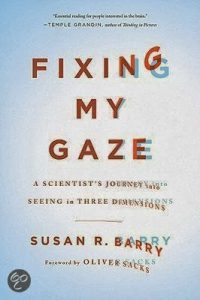 Needless to say this book got me through some grim times. If it was not for the constructive perspective and the better outlook this book provided I might not have been sitting here at all. That’s something unusual to say in a book review I guess. Even reading it for the third time gave me another boost of much needed energy. Every time I read it I am relating more to different parts of the book. Partly because of the fact that I was younger back then and partly because my vision has actually changed over the years! Some parts I couldn’t relate to simply because of not having had that visual experience. The first time I read it I wasn’t just younger, I had the vision development level of a baby. Worse, a visually wounded baby.

Something that struck me every time I read it is the fact that suppression is a more energy consuming way for the brain to see as opposed to normal binocular viewing. These adaptive mechanisms such as suppression are very effort consuming. Smooth binocular viewing is the most efficient way to use cortical real estate. That makes a lot of sense of course. It’s just surprising how far some people can get removed from that healthy integrated viewing position. As an eye doctor you got to be very ignorant about what you are doing to have patients end up three or four years of rehab removed from such a healthy situation. Sadly the brain does not adapt overnight but fortunately it does adapt. This is masterfully described  in various passages, notably the one covering ‘the lazy eye myth’.

All in all the most touching moments in this book are the ones in which Susan Barry attempts to describe how it feels to see in 3D. Paradoxically, there is no way to describe a qualia as powerful as stereovision with language. This makes it all the more tantilizing!

‘Gaining stereovision, I thought, would augment my perception of depth but not change it in any fundamental way. So, I was completely unprepared for my new appreciation of space and for the deep feelings of joy and wonder, the enormous emotional high, that these novel sights gave me. To experience for the first time seeing the most ordinary things in stereo feels like scaling a mountain and witnessing your first mountaintop view.’

Or the description of Rachel, someone who was also previously stereoblind. ‘It was as if I had stepped inside a painting that I had spent my whole life observing. I was awed and moved to tears. I never experienced a forest in this way. The depth of space and emotion was overwhelming.’

Being still on the road to such extra ordinary epiphanies, my attention was particularly drawn to the link between motion paralax and stereovision. Aside from monocular cues such as size, shadowing and context, stereoblind people get some added sense of depth from movement. This is called ‘motion paralax’. It seems that once you learn how to see binocularly this sense of ‘motion paralax’ is greatly enhanced on top of the newly acquired stereovision.
‘So, my ability to see in stereo also translated to a heightened sense of depth through motion.’ ‘For me, as well as for many of my formerly stereoblind friends, one of the greatest surprises and delights of our new vision has been this incredible sense of depth while moving.’

This stayed with me because lately when I take my walks it seems something weird is going on while walking. Things sometimes seem to have kind of an aura. Might just be the gateway to stereo, or heaven… Whatever floats your boat.

Before you start saying I’m totally over-the-top… It’s not all good. Visual transformation takes its toll and even though I don’t have stereovision yet, I can already relate to it ‘just’ from eliminating my double vision. Because many events that happened earlier in my life are only now showing their long term effects along with the overwhelming and exhausting effects of constant visual transformation I related very much to this paragraph.

‘Many days I felt both exhilaration and exhaustion. Most people learn to see when they are infants, at a time in their lives when they are cared for, are free to get cranky, and enjoy lots of naps. I was relearning how to see as a responsible, contributing adult. While I went through all the motions at work, I desperately wanted to be left alone, to be quiet and reverent, to take in one long, delicious look after another. I disappeared on long, solitary walks, I was at a loss as to how to explain this to my colleagues and friends.’

She talks about how this feeling of sensory overload just made her (and others with strabismus) want to be alone. How all the new experiences made her look for more peace. She even describes avoiding the news and instead listening to familiar music. About how the visual transformation is so all absorbing that she had to take on fewer responsibilities at work. I didn’t even remember reading that the first time. Now it’s so relevant to me.

Another awfully familiar experience is feeling like an idiot while trying to explain what you are doing or what you are going through. You want to tell everyone but the reactions are so mellow that you try to relish small victories on your own or with strab friends on the internet. You want to broadcast that stuff even though the rest of the world already ‘got it’ at the age of four months.

It’s clear vision therapy or any kind of rehabilitation takes ungodly amounts of perseverance, practice and determination. I knew that was going to be the case and I thought ‘Bring it on!’. I still think that but now I’ve got the social scars and a VT legacy to back it up. However great the book might be, it will not save you from that. So the fact that I went ‘all in’ for such a long time and basically studied my way out of this sorry pickle gave the pages about ‘active involvement’ in rehabilitation a special flavor.

Having read many other things about vision during my VT time many ‘technical’ names, VT techniques, the organisations involved, the neuroscientists and optometrists, the history of behavioral optometry and passages about the importance of vision in developmental delays all fit together much tighter. The author also emphasizes that the treatment of strabismus is not unambiguous. I personally too have heard of people who have greatly benefited from undergoing surgery. However, it should be stressed that surgery is certainly not the only way to treat strabismus and that in most cases VT is required or even a combination of surgery and VT. Therefore it is of paramount importance that ophthalmologists and developmental optometrists start collaborating. Hopefully this book contributes to taking away the blinders many eye care professionals and educators are wearing.

Last but not least I don’t want to spare anyone the closing paragraph of ‘Fixing my gaze’. This is what many strabismics out there have been dying to hear and wonderfully recaps what this book is all about.

‘I finally relaxed and thought back at all that had happened. When I first learned about stereovision in college, I assumed that if I could see in 3D, I would be better at threading a needle, parking a car, and hitting a tennis ball. Of course, all of this is true, but I had no idea just how different and how magnificent the world would appear in all its glorious dimensions. Most importantly, I learned that I was not the victim of a visual fate that had been sealed in early childhood. I could rehabilitate my own vision. My newfound and hard-earned stereovision has given me an enormous sense of security, confidence, and accomplishment. It is with a stable, clear, and depth filled gaze that I now encounter the world.’