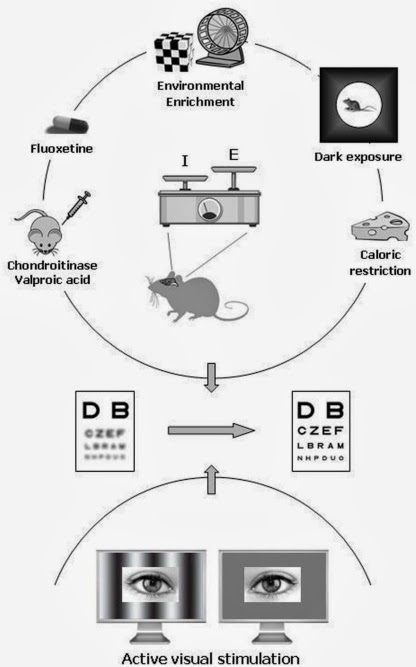 When it comes to strabismus and visual processing disorders most of the medical community seems to have to luxury of living in the 19th century. Other parts of society however move on. Researchers, the military, professional athletes, educators, you name it… Visual training has been pioneered throughout the 20th century by many notable behavioral optometrists and is being confirmed by neuroscientists ever since they had some decent tools to work with. It’s a fact. No doubt about it. Acknowledgement depends on whether you are really interested and motivated to solve the problem or not. So let’s move on to real questions like how might one accomplish results more easily and improve functional ability and quality of life more quickly? How could we make a steep up hill battle less so by probing the brain to be more plastic by targeting specific areas of weakness?

I’d say eating and sleeping well combined with moderate exercise is a good start. Avoiding negative influences and toxic people isn’t too bad an idea either. It has been said (New perspectives in amblyopia therapy on adults – 2011) that certain medications and anti-depressants can induce more plasticity and make one more receptive to neural change. Personally I’m not a big drug man. Often there’s no way of predicting how a certain medication will interact with your particular brain chemistry. Moreover, not only does it take weeks for a certain course of treatment to take effect, it will also take weeks to get it out of your system if you don’t react well to something. Since doctors don’t really know your situation and just prescribe whatever and I always seem to react rather peculiarly to things, I am not getting in line to take pharmaceuticals for the moment. But that’s just me.

I’ve read or, more accurately, listened to some of those papers completely and some of them partly. The ‘conclusions and future directions’ as stated in ‘Battery powered thought‘ provide a good overview of what the technique might offer: “Intriguing results have been demonstrated using tDCS for cognitive enhancement in healthy volunteers, and some studies have additionally found positive effects of tDCS in clinical populations. Though much more research is needed, cognitive enhancement with transcranial electrical brain stimulation may even eventually be accepted as an alternative form of treatment for clinical populations, and neuroenhancement for healthy populations. Compared to other techniques, tDCS offers many advantages due to its relative safety, noninvasiveness, low-cost, and portability. Research into the effects of tDCS on cognition will undoubtedly continue and, along with other brain stimulation methods, may spark a new age in the way we think about treating neurocognitive dysfunction.”

As you can see from some of the research titles, not all of this research is conclusive. On the other hand, there’s definitely something to tDCS. It’s not just a smoke screen. The US military for instance uses TMS to enhance perception and perceptual learning in drone pilots. I’m sure it sounds pretty crazy to run electricity through your brain but if you really start thinking about it, it makes an awful lot of sense. The small amount of current is not dangerous and is far more targeted than taking pills, few or no side effects have been reported, it doesn’t take weeks for it to work or get off it and it’s cheap. Since the brain is an electrochemical mass I’d rather add some electricity for a small while with the option of just taking the electrodes off my head than taking pills for weeks before knowing what is up. Because of these advantages, I’m sure we are going to hear a lot about tDCS in the future as its applications are numerous.

Since it is a low cost technique and I don’t have any more time to waste, I bought tDCS supplies online and with some help from a strab friend I went for it. By the end of this week I’ll summarize the details and my experiences in part 2.