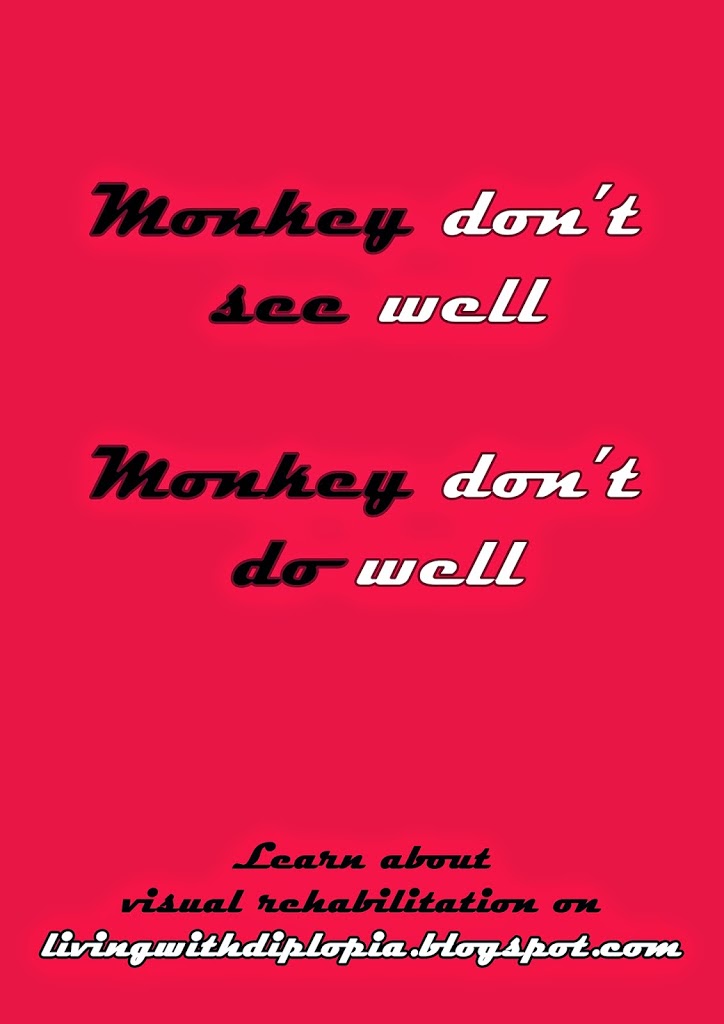 It took one year and eight months to somehow position my eyes in alignment in a particular stationary position and have my first singled out view in years. Now another one year and eight months later I’ve managed to stabilize my gaze while moving my body and moving throughout space. I can even maintain a stable world view without ‘land slides’ because of crippled eye muscles preventing smooth eye movements while doing head turns. It’s amazing! My gaze and world remains stable while turning my head in circles up to 1,5m away from my face. Closer fixation is still a bit wobbly and unstable.

I can barely remember anymore how horribly screwed up my vision was 4 to 5 years ago (fortunately I wrote it down somewhere). Granted, it takes a long time but the human body does seem to have this amazing capacity to recover from all kinds of trauma. I never imagined I would see the day I’d have vision like I have right now. It’s still hard to contain my impatience and enthusiasm as I get closer to a livable and workable situation.

Traditionally I used to be eso (cross-eyed) but the surgeons put my eso brain in an exo (wall-eyed) body and ever since I’ve been trying to reconcile the two. As I’m closing into the near distance range, life is about to get a lot more comfortable. Three years is a long time but given the starting point a lot of ground has been covered during that time which makes three years seem like a short time in comparison. Based on that experience I feel confident in saying I will be able to read comfortably by summer 2015. Hell yes, yes, yes! How glorious will that be! Throughout my life I’ve been a slow starter in learning new skills or abilities (and now it’s obvious why) but later on I was often able to overtake most others by keeping at it. I wonder whether I would be able to pull off the same feat when it comes to my vision. Maybe.

The other day my hilarious friend Anja was telling me how easy life actually is for mere mortals if you don’t have to deal with all this impaired vision stuff… It did in fact sound pretty great and it seems like I’m going there! Use my vision to work and get some money, use my vision to have fun, use my vision to catch up on reading and learning, use my vision to live. That sounds pretty star dangling awesome. Let’s take off the brakes and go to that place. Learning with binocular vision issues is like surfing the internet with a dial up connection: slow and expensive. I’m so ready for a broadband connection… That’s all I ever wanted and I’ll get it. They’ve kept me impaired long enough now. 1,5m visual range, come to papa.