As a strabismic child that suppressed one eye at the time, I played football (soccer) during every recess period at school. Clearly I had no stereo vision. Nonetheless I was a fairly good player and loved playing. I could be totally absorbed by it. At one point I also tried playing in a club. Because of my vision dysfunction I didn’t have the energy to both keep up with my school work and go to the training sessions so I had to quit. Suppressing one eye is a wasteful business. I had good reading comprehension but read very slow and have never been able to fluently read aloud. Just doing my homework was enough of a physical training.

Therefore my football practice stayed confined to school recess and lasted up until the age of 12-13. Past that age football was gradually reduced to the occasional game during mandatory gym classes in school. Still, I LOVED playing that sport. Nothing so exhilarating and relaxing as just going for it during a game of football.
After the age of 13 school work increasingly started absorbing ridiculous amounts of time. When I developed double vision at the age of 18 and underwent the misplaced surgery, leisure sports went down the drain except for the occasional run. Double vision is not very practical when it comes to ball games, or anything else for that matter.
PRESENT
It’s been a little over a year since my diplopia started to subside after 5 years of constant double vision.  However, it’s only recently that  the increasingly accurate positioning of my eyes is starting to ‘sink in’. A month ago, spurred on by the WC merchandise machine, I bought a cheap football in the supermarket thinking it’d be fun to do some oculo-motor ‘cross-training’.
Have a look at what happened after a week or two after messing around daily for an hour or so. The video builds up towards the end and the last thirty seconds are pretty neat even though I say so myself.
Not bad in light of my history of strabismus (surgery) and the fact I don’t even have stereo vision yet! Please allow me to explain why this is happening at this point in time.

“It is important to understand the many aspects of vision to be examined, and to gather quality data on each patient, as the visual system is a covert system, where the process and outcome are evidenced not as “visual”, but as motor or verbal outputs.” – Vision Rehabilitation

As you might have noticed from previous blog entries, I’ve been putting a lot of work in refining my eye movements. By this I mean getting them to be more precise and consistent as opposed to spastic and erratic. In my case the first phase of strabismus rehabilitation can be described as overcoming oculo-motor restrictions/palsy. The way our eyes move might just be the most important part of seeing and most people don’t even realize it. Depending on the strabismic patient and whether or not he had surgery this will take some time. However long it takes, it has to be done in order to progress to more advanced levels of binocular and visio-motor integration. 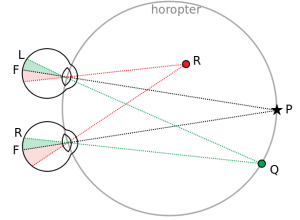 I’ve NEVER been able to effectively juggle a football before, let alone 33 kicks without it touching the ground. The only reason why I can do this now, after years of not playing, is that I can keep both of my eyes focused on the ball. Even though I don’t have full blown stereoscopic depth perception yet, my brain already makes these subtle trigonometry inferences about its position. That never happened before. The first 17 years of my life I was suppressing one eye, then I lived through a couple of years of double vision and now the eye alignment is starting to be incorporated at a cortical level. This is an aspect of binocular vision which is evidenced as motor output as I do not SEE any depth yet. Cool, right?This was again confirmed in my VT session (#74) today. I had a 90 to 95% success rate deciphering the relative position of objects while viewing tranaglyphs and polarized vectograms by ‘grasping them’ in midair. It’s unbelievable! I was just staring at my hands thinking ‘magic hands’. Magic brain rather! This depth perception stuff is creeping up on me silently!

In light of that, these new found football skills make sense. The target is pretty large and it’s a bit further than the distance range used for reading. Thus it requires less accuracy and less converging than reading. A nice stepping stool. This is good news as my optometrist said that this kind of motor feel for depth often precedes the actual seeing of depth.

My Dutch VT friend Yvette used to be horrible at catching things. This, to her own surprise, improved dramatically after working on her binocular vision skills for a year or two. She now says ‘I can see the hole in the Frisbee and actually catch it’. When she, unrelated to her DIY VT efforts, enrolled for a course of slack-lining (walking a tightrope), one of the exercises was to catch things while keeping balance. ‘Even though I was shaking like hell and did not find a stable balancing position, I was able to catch everything. Now I can also catch with my left hand, even without looking directly at the object.’

This is remarkable for a clumsy strabby who was never able to catch anything before! As she already acquired some stereovision, this is something to look forward to. Nevertheless, the benefits of stereovision are much broader than being able to catch stuff. From what I read, it’s a whole different way of life. For now the punch line is that I’m making good progress and the best is yet to come. We ain’t seen nothing yet!

Additional reading on vision, the brain and football
– http://www.axonpotential.com/teaching-your-brain-how-to-play-soccer/

This article has 7 comments