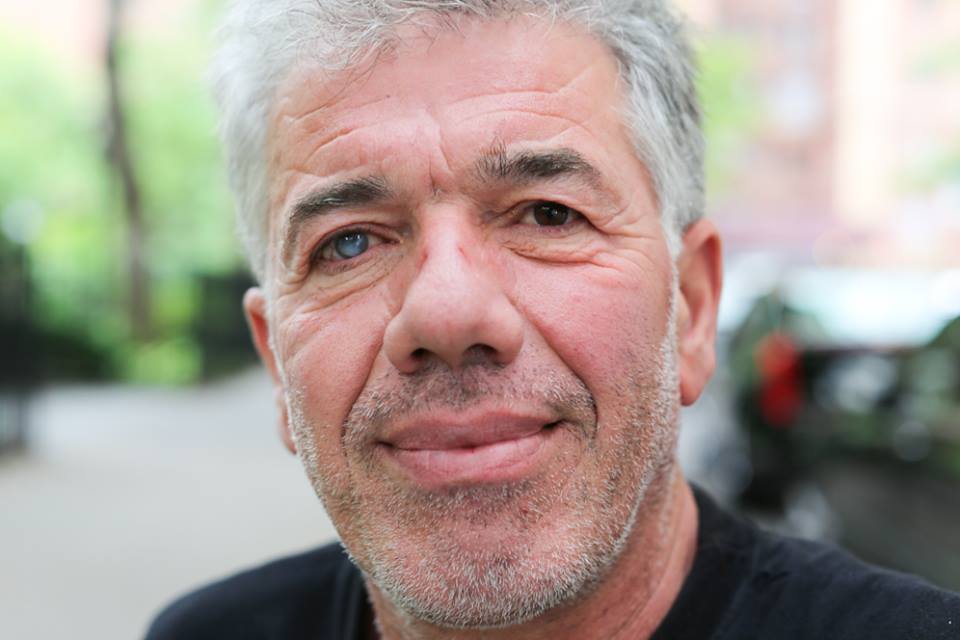 This little charming story by ‘Humans of New York’ reminded me of the many times I have bumped into people and objects on my left side. For instance, as a kid I was frequently punished for accidently breaking things or ‘not behaving’. As a teenager I remember one incident that occurred while I was trying to navigate a busy street. By mistake I bumped into a young woman with my shoulder without bad intentions, immediately apologizing. I quickly left the scene before her Alfa-male boyfriend was ready to punch me. Ha!

On another occasion I quite simply hit the metal detector at the airport with my left side while trying to walk through it. Apparently regulations state that anyone walking onto the detector has to be frisked in any case. Another pleasant left side neglect experience!

Even now, having much less suppression of my left eye, having a wider visual field and being relatively more binocular and bilateral, I frequently bump into objects on my left side. Just yesterday I hit a door post with my shoulder while running into a room. Ouchie.

Fortunately, as it happens, I just read the ‘Evaluation and Treatment of Visual Field Loss and Visual-Spatial Neglect‘ chapter of the book ‘Vision Rehabilitation’! Just when I thought I had read all about my life in the Spatial Vision (!) chapter, or at least about what has been missing from it, those vision nerd authors pulled me back in! ——– (Expect a book review, people. Expect it!)

The most known causes for visual field loss are eye disease (see picture) or damage of some sort to one or both of the eyes. This is the case for the gentleman featured above. 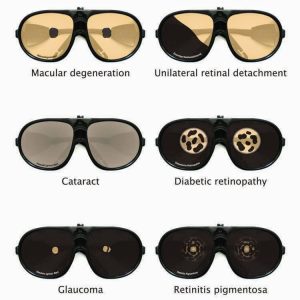 Often, however, visual field loss can present more subtly on a cortical level. Cortical vision loss can occur developmentally or due to various kinds of brain injury. Whatever the cause of the visual field loss, the symptoms and the suffering associated are similar. Because of the complexity of the brain, cortical vision loss is very personal and presents itself differently in each patient.

Measurements of visual field loss are performed following the quadrant schematic. I’m not going to get into all the possible types of vision loss but it is important to know that various types of visual training, sometimes including the use of prisms, are available to improve visual brain function. Even when it is impossible to recover vision in a certain field, training can systematically improve adaptation by optimizing residual abilities. Relearned environment scanning can avoid future accidents, elevate quality of life and increase independence.

One very interesting aspect about visual field loss is that some patients lose conscious awareness of what is seen in a field due to damage to the primary visual pathway or the visual cortex but can still intercept valuable visual information through unconscious visual processing. This is called blindsight. In case of blind sight a partially blind patient might be able to perform saccading or pointing to an object in the blind field, be able to use information from the blind field to better execute perceptual tasks in the intact field or even be able to ‘guess’ features of an object in the blind field at much higher rates than chance. There is indeed a neurological basis for these peculiar skills. Even more interesting for the cause of vision rehabilitation is that these latent abilities can be trained to eg. improve maneuvering. — Also check out this video on blindsight

Many patients with visual field loss are aware of the fact that they have lost vision in a certain field yet some aren’t. That’s where things get even more tricky. Some patients with visual-spatial neglect are in some sort of ‘denial’ about their missing visual field. It simply doesn’t exist in their mind. People with visual-spatial neglect think they have an accurate representation of their environment and don’t really feel the need to compensate for their visual deficit. This too can present in a number of degrees. There’s personal, peripersonal or extrapersonal neglect. People with personal neglect do not only ignore half of their visual space but also ignore half of their own body image to a greater or lesser extent. Peripersonal neglect indicates the neglect of space within arm’s reach and extrapersonal neglect adds the neglect of space beyond arm’s reach.

The presence of moderate to severe visual-spatial neglect can disrupt a variety of daily activities such as dressing, eating, reading, writing, walking, returning to work, and driving. Patients with left visual-spatial neglect will typically veer to the left when walking or bump their left shoulder on the doorframe. (BINGO) — Vision Rehabilitation

Since most eye doctors aren’t even capable of detecting or treating any brain based vision dysfunctions which are often literally staring them in the face, it is no surprise visual-spatial neglect often goes undetected. In my case bumping my shoulder and what seem minor mishaps were less worrisome to me than, say, double vision. Nonetheless, many with more severe visual-spatial neglect, but without associated motor deficits, go undiagnosed and untreated following stroke or TBI.

They may be misdiagnosed as having dementia, as family and caretakers are unable to understand why a person might end up with their pants on backward (when they put them on, they only acknowledged one leg, so there was no frontward or backward choice), or why they forget to finish a task or put away tools. It is not always as easy as noticing that they do not finish food on one side of their plate. Patients with visual-spatial neglect are frequently misdiagnosed as having visual field deficits by vision care practitioners who are unaware of the possible diagnosis or visual-spatial neglect. — Vision Rehabilitation

Indeed, it is not always easy to determine whether a patient has visual field loss, visual-spatial neglect or both! That’s why appropriate testing has to be done in order to get answers to those questions and get appropriate treatment.


As for the connection between strabismus, visual field loss and visual-spatial neglect, it is clear there must be a considerable incidence of neglect among strabismics. Suppression of part of the visual field to deal with misaligned eyes can be seen as self-induced visual field loss. This suppression of one of the eyes, be it permanently or alternately, leads to a reduced field of vision. In my case it is no surprise I bump into doors with my left shoulder as my left eye was traditionally the ‘lazy’ one. Even now with a field of vision that is as binocular as ever, I still tend to suppress peripheral vision coming from my left eye in more stressful situations requiring focus. Clearly this also affects my body image as I seem to be less likely to take into account the existence of my left side while moving.

The most common location for the lesion causing left spatial inattention is thought to be the right parietal lobe. In most patients, corresponding lesion to the left parietal lobe causes mild or transient visual-spatial neglect of the right space. It has been hypothesized that the right hemisphere modulates attention to both hemi-fields, where the left hemisphere modulates attention mainly to the right hemi-field only. Thus, damage to the left parietal lobe may cause an imbalance in allocation of attention from the pre-injury state, but damage to the right parietal lobe, common in middle cerebral artery infarct or aneurysm, causes marked visual-spatial neglect, as this is the major cortical substrate for orienting and allocating selective attention to the left hemifield. (!) In very young children, this hemispheric dominance for spatial attention is not yet fully developed (!) as evidenced by line-bisection tasks at age 4-5 years (!). Children show adult-like bisection with a slight leftward bias in bisection by 7-8 years of age. — Vision Rehabilitation

That solves the mystery then. At the age of three my bispherical development went array and I developed amblyopia, strabismus and visual-spatial neglect. In addition to the distorted body map and frequently missing visual fields, unreliable alignment of the visual axes produces conflicting input to answer the basic ‘where am I?’ and ‘where is it?’ questions. Answering those two questions are the two primary objectives of the visual system preceding the ‘What is it?’ and the ‘What to do about it?’ questions. In developmental strabismus, neglect might in fact be a way of dealing with these conflicting inputs. To resolve the conflict one side has to foot the bill. That’s why, at this point in my rehabilitation, I am putting a lot of emphasis on not only aligning the eyes but also paying attention to my entire visual field and doing activities that promote bilateralism. Again it seems to come down to the magic three: the integration of visual input, vestibular input (balance) and proprioceptive input (self awareness and body image).

I’ll try to be more practical about what I actually DO to integrate those types of sensory input next time. 🙂