I’ve been reading up on the link between vision and the vestibular system. It’s been quite instructive to say the least. Of course it’s annoying not to be able to align the eyes and have double vision while reading etc… However, there’s more. It’s very interesting how compromised eye movements, in large part due to eye muscle surgery, and consequently a compromised Vestibulo-Ocular Reflex are likely to be the biggest source of disability and fatigue for me personally. When going beyond my relatively low visual endurance limit, the sensory conflict between the visual and the vestibular gets exacerbated. It sometimes feels like being drunk and can even give me something resembling to a hangover later on. Not merely alignment of the eyes but also the integration of these ocular motor skills with the vestibular system will be crucial in terms of lasting vision therapy results and daily functionality.

What is the vestibular system?

– Peripheral
The term ‘vestibular’ comes from the Latin ‘vestibule’ which means room. This ‘room’ is located in the inner ear and contains a minute amount of chemical fluid. Its workings involve the detection of fluid movement by receptor hair cells in various differently oriented semicircular canals. Vestibular injury may or may not be accompanied by hearing loss.

– Central
The vestibular sense is often misunderstood or overlooked. That’s because, for instance, there is no such thing as a primary vestibular cortex.

‘There is, rather, a complex of cortical targets many of which remain difficult to understand. From the brainstem, vestibular signals reach a subcortical structure called the diencephalon. Tucked in between the cerebral hemispheres the diencephalon houses such important structures as the pineal gland, hypothalamus, and thalamus. Compared to the cerebral cortex the diencephalon is small in size but is very rich in nuclei for sensory, motor and limbic pathways. The thalamus is a central relay station for all incoming sensory signals excepting olfactory information.’ – Vision Rehabilitation

Without going into detail, we can conclude this sense is for a large part located in the primitive,  reptilian part of our brain which houses many basic but vital functions. In fact, this sense is so essential to our functioning and well-being, that the vestibular nerve is the first fiber tract in the brain to begin myelination during pregnancy. This process starts by the last week of the first trimester. By the end of the fifth month of pregnancy, the vestibular organ has reached full size with ongoing myelination of pathways to the eyes and the spinal cord.

– Function
Whereas the anatomy and chemistry of the vestibular system itself are fascinating, its interaction with the visual system and other somato-sensory systems are even more interesting.

The primary role of the vestibular system is to provide the brain with information to regulate posture and to coordinate eye and head movements. Proper vestibular functioning and integration with the other senses is of major importance to good overall health, optimal functionality and vision.

‘The vestibular system plays an important role in the generation of eye movements that compensate for head movements. Through vestibular nuclei in the brainstem, each SCC (semi-circular canal) is able to communicate with motor neurons of extra-ocular muscles to cause eye deviation in each canal’s own plane. This interaction is the basis of the vestibuloocular reflex (VOR), which stabilizes gaze upon an image or the visual world during head movement. If the VOR is impaired, loss of gaze stabilization is the result. For example, as the patient turns the head while walking an object in the visual field or the whole visual environment appears unsteady or “bouncing.”

Demer described the VOR as a “synergistic” interaction between the vestibular and ocular systems. Normal VOR stabilization is needed for “functional vision, and vision optimizes the performance of the VOR”. Dynamic visual acuity (DVA) plays a role in maintaining a sharper image on the retina, while the VOR steadies gaze during head movement. This interaction is called the visual vestibuloocular reflex (VVOR).’ – Vision Rehabilitation

‘Sensory receptors in the eyes provide important feedback regarding orientation of the body in space. In other words, where is the head in relation to the horizon? As discussed in Chapters 5 through 7, dysfunction in the visual perception of “straight ahead,” common following brain injury, can cause dizziness, disorientation, and imbalance. In the process of orientation, visual input also provides information regarding possible environmental hazards, barriers or avenues of escape. In the presence of impaired inputs from either the somatosensory (sensory projections from all over the body) or vestibular or both systems there is a strong dependence upon visual input. Defective input from one of the three systems (visual, proprioception/somatosensory, vestibular) may be compensated for by the remaining intact systems such that the patient is able to function, albeit with some discomfort and loss of efficiency. However, dysfunction in two of the three systems will result in significant disability.’ – Vision Rehabilitation

Even though the vestibular sense might often be overlooked by physicians, one will be made aware of its existence in case of dysfunction.

Inappropriate nystagmus may also be provoked by head shaking and indicates an imbalance of dynamic vestibular function.

An indicator of inappropriate nystagmus of central origin, caused by brain dysfunction rather than dysfunction of the peripheral organ, is often the inability to inhibit nystagmus with visual fixation.

– Vertigo
Even though dizziness and vertigo are often used interchangeably, technically there is a difference. Vertigo refers to the illusion of movement, typically rotational, when no actual movement is observed. True vertigo refers to vestibular system involvement.

‘There is a hierarchical preference to rely on visual input more than any one of the other two systems (vestibular, proprioception) involved in balance. Vision, as proposed by Bronstein, had a dominant role or “hierarchical preference” over proprioceptive input in the process of maintaining upright posture and balance. However, Mallinson et al. suggested that a “visual preference strategy” would not apply to some individuals who have an intolerance for any disagreement between visual and vestibular signals. Paige had previously called this disagreement between the two systems as a “visual vestibular mismatch” (VVM) and others referred to it as a “sensory conflict.” By 1996, the “sensory conflict” theory for the development of motion sickness had been accepted within the scientific field studying this subject.’ – Vision Rehabilitation

Of the top of my head I can think of two interesting cases I read about involving vestibular dysfunction.

In the book ‘The brain that changes itself’, Norman Doidge described a woman who felt like she was perpetually falling due to vestibular injury.   Her vestibular organ was damaged but her central vestibular processing capabilities were intact. We can’t even start to imagine how she felt. It completely ruined her life. Until a certain Doctor thought of the idea to supply her brain with ‘vestibular input’ in a different way. He connected an accelerometer to a tongue outlet which gave her a certain signal depending on the direction towards she was falling. Through the mechanisms of brain plasticity she learned to ignore her vestibular organ and to stabilize herself using this new input stream. Somehow over time, as her brain re-calibrated, she became less dependent on the device and needed it less and less.

Another vestibular story was featured in Oliver Sacks’ ‘The man who mistook his wife for a hat’. A Parkinsonian, 93 year old, retired carpenter whose vestibular sense had become more and more unreliable started walking tilted over to one side without knowing it. His senses deceived him until he saw himself on camera. He was speechless. After this discovery he wondered whether he could apply the mechanism of a spirit level to his problem. He designed a pair of glasses including some sort of spirit level which he could then use to teach himself to walk upright again. Essentially he retrained his impaired vestibular system using visual feedback. At first it took a lot of conscious effort but later on it got easier and easier. Just like learning how to drive a car.

‘There are a variety of reasons why patients suffering from episodes of vertigo develop anxiety, depression, poor self-esteem, and a growing sense of disability. The fear of falling or the fear of heights is common. Concern for a sudden onset of vertigo and the loss of control in public venues often leads to avoidance behaviors or “safety-seeking behaviors,” as coined by Gurr and Moffat. The appearance of staggering, falling, and confusion may lead observers to believe that the person is intoxicated. The patient soon finds him/herself avoiding social events and staying home to avoid embarrassment. Physical activity is avoided for fear of provoking an episode.‘ – Vision Rehabilitation

Rehabilitiation of the vestibular system

Vestibular injury or dysfunction can impose dramatic alterations in a patient’s once active lifestyle. There will be occasions when medication can be helpful in the short term. Surgery is the rare choice. Therapists take caution when a patient has other disabilities (brain trauma, stroke, peripheral neuropathy, spinal conditions, and/or vision disorders), which may limit choices of exercises.

‘A key factor in achieving the best outcome will be patient compliance. Education is the greatest tool used by a good therapist to engage a patient’s willing participation in what is usually a difficult treatment program. Between, both, the vestibular therapist and the psychotherapist the patient is assisted in understanding the basics of the dysfunction: Why symptoms occur; the emotional response; and how treatment should help. Initial treatment typically provokes unpleasant symptoms but feeling worse comes before feeling better. Another factor in achieving the best outcome involves adequate intensity and duration of the treatment program.

Progression of function is the best gauge for the effectiveness of treatment. The process of treatment involves strategies for adaptation and substitution by using other strategies, habituation (desensitization), and retraining of balance. As the patient is able, exercises are expanded to include cardiorespiratory conditioning.Goals of vestibular rehabilitation are to (1) optimize compensation in the balance system; (2) habituate abnormal vestibular responses to rapid movements; (3) reduce fall risks by improving balance and postural control; and (4) educate the patient.’ – Vision Rehabilitation

Is it a vision problem or vestibular problem?

That is why in the more advanced stages of Vision Therapy you are not only training eye movement. You are to stimulate your way towards overall sensory and thus vestibulo-visual integration. There’s a million ways to skin that cat. Some of the things I do as vision therapy loading: walking, head turns while attempting to keep my gaze stable, walking a beam with yoked prisms, balance board, jumping on a trampoline, standing on my head, running, …

When my vision tends to go blurry or double and I feel dizzy, it’s time to take a break. I flirt with my limit, take sufficient rest and remind myself that sometimes you do have to feel worse before feeling better. Improving these elementary vestibulo-ocular skills does influence and improve more sophisticated and more cognitively taxing ocular motor activities such as reading. The ground is being prepared! 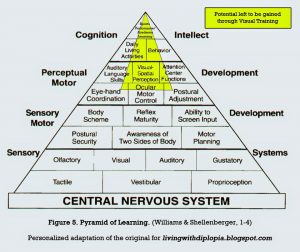