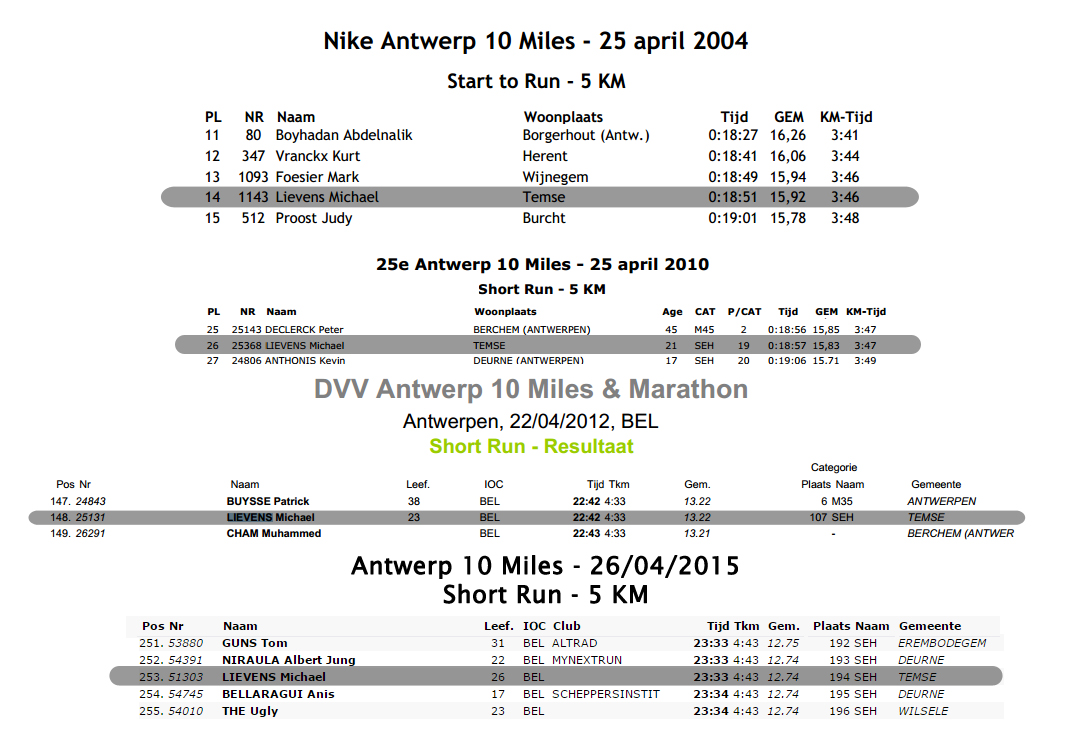 After being out for a couple of years and focusing my energy on my vision, I decided to slowly give running another try. Running is not my main focus but I try to use it as complementary training to my vision rehab. That is, when I feel I can handle it and won’t go in overload.

It’s unfortunate that these mistreated vision problems have dragged my physical and neurological condition down to such an extent because I used to be a natural at running. My performance should be peaking rather than dipping right now. I’ve never done many races in my life but so far I have done 5K, 10miles (16K) and a half marathon (21K). I decided to do another 5K race in 12 days. I’m looking forward to it but I’m keeping expectations low. I think I can do 23 minutes but we’ll just see what happens. If I clock at 25 minutes, that will be alright too!

Here are some of my previous running results. If I can have the same outcome as in 2012, it is a de facto improvement because my vision (ocular motor control) is much better now than it was back then.

I immediately added the results of this year to the image. The race went pretty okay. I started out easy and then, after the 3KM point, deployed whatever energy I could muster. During the last kilometer my vision was getting very shaky. So much so that I barely recognized my awesome friends who were cheering by the side of the road. Fortunately you don’t need that much vision to run your longs out. When I arrived I was very dizzy but I fairly quickly recovered my normal (current) level of ocular control. I did not revert to double vision. Running the 5K wasn’t the actual challenge. The challenge was to see what would happen afterwards. Would I be able to function normally and get home or not? To my delight I did alright. My nervous system and ocular motor control recovered enough not to be a zombie for the rest of the day. We went to grab some food and we had a nice day without me crashing.

Nonetheless, it remains interesting to see these time differences. I attribute it to the following cause (but I could be wrong). When I was younger, I would have a very low resting heart rate. When checking my heart rate, doctors would always ask me, ‘Do you do any extreme sports?’ or ‘Are you doing sports on a professional level?’. I didn’t. I didn’t even run that often. Just when I felt like it, which was usually on Sunday. I was simply physically strong from having to endure academics with limited visual skills. To me, reading is much harder and physically taxing than running.

Sadly, these days my resting heart rate is not that slow anymore. I have the occasional panic attack and have to endure the stresses of an unrecognized handicap without income replacement or compensation for medical malpractice. The only thing I can do is wait and do my vision rehab which has been a very long and arduous process without breaks. Fortunately, relatively speaking, I can now see light at the end of the tunnel. I was lucky to find enough support and have played my cards flawlessly to get to this point. Now over the next year or so I have to finish it. I think that only after having acquired the security of reliable vision and body performance and hopefully, God forbid, a steady income stream, I will get some peace and might be granted a more slowed heart rate once again. Being more relaxed from time to time helps your body recover and allows you to build reserves. In that case of a slow heart rate, you can elevate that heart rate to a much greater extent when it is actually needed for physical performance. This instead of heart throbbing from being cornered and betrayed or the occasional, and ultimately useless, panic attack when dealing with a visually (and otherwise) unstable world.

Nothing is more crucial to the survival and independence of organisms—be they elephants or protozoa—than the maintenance of a constant internal environment. Claude Bernard, the great French physiologist, said everything on this matter when, in the 1850s, he wrote, “La fixité du milieu intérieur est la condition de la vie libre.” ,- Oliver Sacks