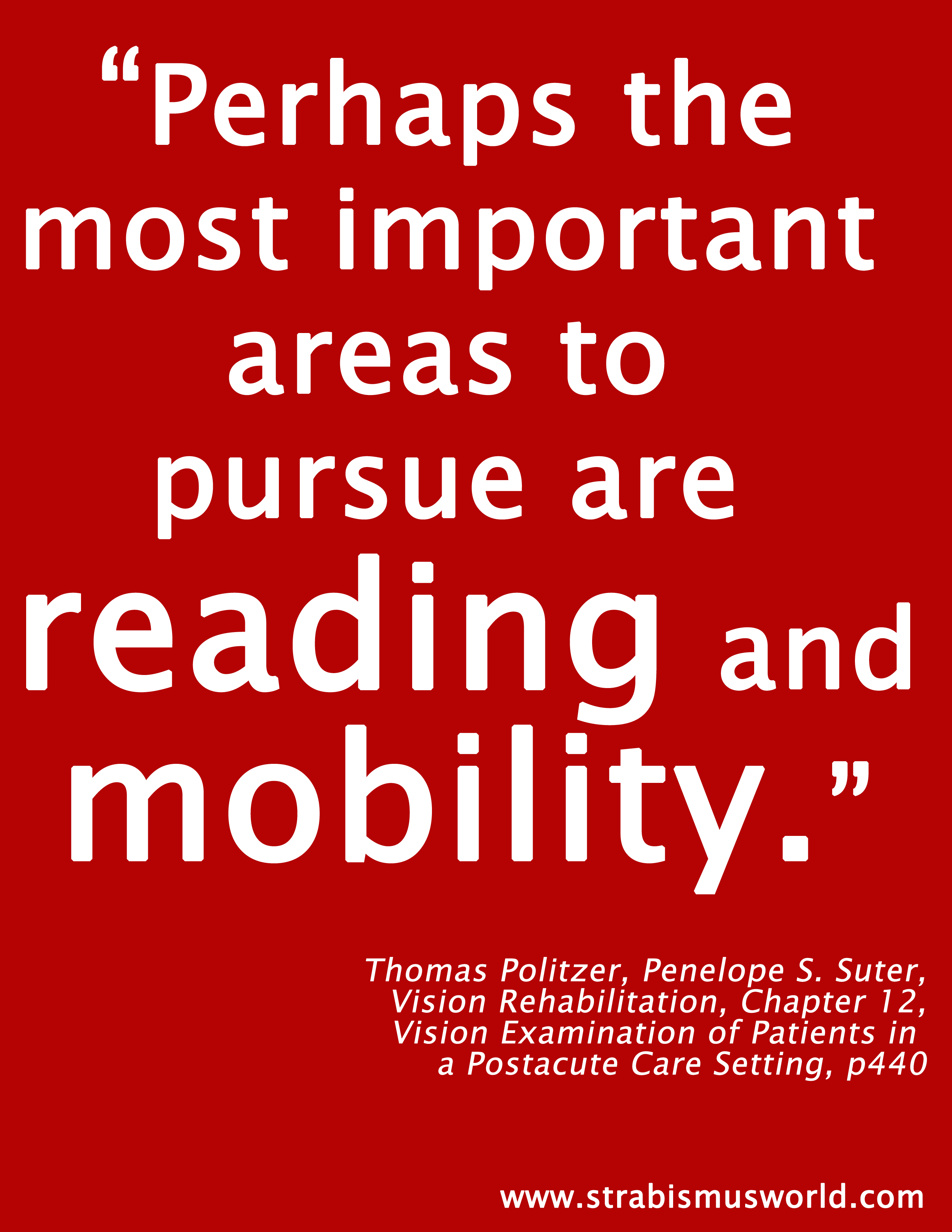 REMINDER: When reading on a desktop, you can have the article read to you by selecting the desired paragraph and clicking on the little speaker icon.

My last official VT session, for now, was on the 27th of March, 2015. Because of a personnel change at my developmental optometrist Guy Naegels’ practice, I was asked to discontinue training at his office. My training optometrist, Sofie De Witte, who has been working with me for over four years, has left the practice to become a fully independent practitioner. I can still return to Guy Naegels’ office for the occasional check-up but as far as continuing training is concerned, I was advised to find a way to frequent Sofie’s new location if necessary. It was suggested that, since by now I’m so knowledgeable about vision and VT, I might just take it from here and keep improving by myself.

That’s what I’m doing and, from what I can tell, it works just as well. Nevertheless, it’s nice to have some feedback in terms of cheiroscopic drawings and specific exercises such as for instance tranaglyphs, vectograms or the aperture rule. That is why I might still be planning to visit her new location although it’s sort of a logistical bummer because of its remoteness and lack of proper public transport connections.

While I haven’t been to an ‘official’ VT session in three months, my personal arsenal of VT tools is pretty elaborate. Even though it’s nice to have an encouraging coach, much of the time vision improvement is a solo sport. Moreover, once you have advanced to a certain point and start to develop some sort of visual comfort zone, you can start incorporating visual exercises into daily tasks. In that respect, things are going pretty well. Generally, I’m more active than a year ago. I can wake up somewhat earlier in the morning. I’m more social and seem to experience less major set backs in terms of fatigue. Fingers crossed, of course, but those are very important elements.

Ever since the surgeries, the major stumbling block has been ocular motor ability rather than sensory receptiveness. In other words, the main issue was and to a lesser extent still is uncontrollable and overwhelming sensory input which I was unable to ‘steer in the right direction’ or incorporate motorically (eye-body coordination).  Rather than ignoring one eye, my brain wants to deploy both eyes but it is prevented from doing so properly because of physical limitations. This stems from both the original palsy and the surgery-induced restrictions. That’s why my brain and sensory systems are perpetually hustling to get the ocular motor (eye movement) backing they need to function smoothly. This causes fatigue and/or visual confusion.  These symptoms manifest themselves most clearly during activities related to reading and mobility. When reading, listening to and studying a great text book called ‘Vision Rehabilitation‘ last year, I was struck by a seemingly casual phrase towards the end of the book.

I should, and plan to, review ‘Vision Rehabilitation‘ some time in the future.

In a post-acute care setting, reading and mobility are the two most important areas to pursue to get the patient back ‘on his feet’ (no pun intended).

The lack of ‘ocular motor back up’ also explains my lack of quick convertibility between different tasks requiring differing types of eye movement. For instance, ever since I can remember I didn’t really dislike cycling by itself but I found it awful as a means of transport. I could have a nice bike ride for the sake of having done some exercise but not to get places. I didn’t understand why… I told myself it was because I’d arrive sweaty and that’s annoying or some excuse of that sort. I realise now that it was because as long as I was on the bike, I was fine. Once I got off the bike at my destination, I would feel rather dizzy and out of focus. What’s the use of getting to your destination if you can’t be fully functional once you get there?

For some weeks during my teenage years, I went to a school I had to get to by bike. I had to traverse seven kilometers by bike in the morning. Then I’d arrive groggy at school and would be completely unable to switch to near distance desk work. That was a complete disaster. Today, I understand why that occurred. Notwithstanding, back then, there was no way in the world I would be able to keep up at school if I had continued to go to that school. If my vision had been well integrated with my vestibular and motor systems, I would not have had these post bike ride sensory break downs. Another great example of an episode in my childhood where I almost completely lost it, especially in view of the fact that my parents just added to the malaise. Fortunately nowadays we have the internet and neuroscience coming to our rescue!

The same problem occurred and occurs when riding buses. I hate buses. They stink, they turn, they are loud and make you motion sick. Trains and metros are more acceptable in terms of comfort and the fact that they take less turns. On the other hand, I always liked driving. The most annoying thing about taking driving lessons at the time was going there by bike! I’m not a particularly bad driver either. God’s honest truth! I have witnesses and stuff. I do, however, have to be well-rested and can not drive for much longer than an hour. I think I like driving because it gives you have power over what happens to you, yet you don’t have to exhaust your own biological motor systems as is the case with a bike. I have the same problems with convertibility though. Driving is less exhausting and allows for better physical performance when arriving at my destination but I will have trouble switching to near point tasks. Perhaps that’s because they are a problem at all times, me having driven a car or not. I guess it is simply more noticeable with the slightest trace of fatigue.

Keeping in mind that the motor aspect (strabismus as opposed to amblyopia) is my main ailment, and I not only need to improve ocular mobility but also its integration with general motor ability, I thought it would be a good idea to take up cycling again. My uncle’s bike was put at my disposal due to changing circumstances so I took that as a sign from the Gods as well. In the end, it’s good motor-vestibular-visual practice. If the deficit or dysfunction resides lower on the developmental pyramid, you should start with addressing and integrating these fundamental building blocks as we learned in last week’s Book Review. On the one hand, my eyes are getting rather skilled at doing gross and divergent movements. On the other hand, they are still rather unskilled or less skilled at doing fine and convergent movements. While biking, one is mainly looking in the distance, requiring gross and divergent movements, while balancing (vestibular) and peddling (additional motor loading). Sounds like something I can handle now!

This new activity is a great example of how I feel slightly more energetic and secure than even a few months ago. I go on these bicycle rides around 9pm when the sun is setting, the light is less overwhelming and traffic is less busy. Doing this, I discover Brussels and build a mental road map of its streets. Throw in some advanced visual processing while we’re at it! A year ago, I would have been way too tired at night to go on bike trips.

To my delight, I discovered a wall full of murals in my neighbourhood. In addition, I discovered that, when standing 2 to 3 meters away, I could read the large fonts comfortably. My eyes moved pretty smoothly over the text. I barely noticed any lagging of my left eye or any ghostly double images. The text was clear and my eyes could track it, even after a thirty minute bike ride. I have repeated this test on various days to make sure it’s a reliable skill.

I observe the wall. I observe myself. I think to myself, ‘If only I would be able to do this at a closer distance range and with a smaller font as in normal desk reading, I would be done with this problem and I would have achieved my goal.’  Two or three meters isn’t that far so I’m getting closer. It won’t be easy and I’m not getting any younger but it’s doable with more time, practice and patience.

When standing at the same distance as the bike, I can read the comics comfortably. 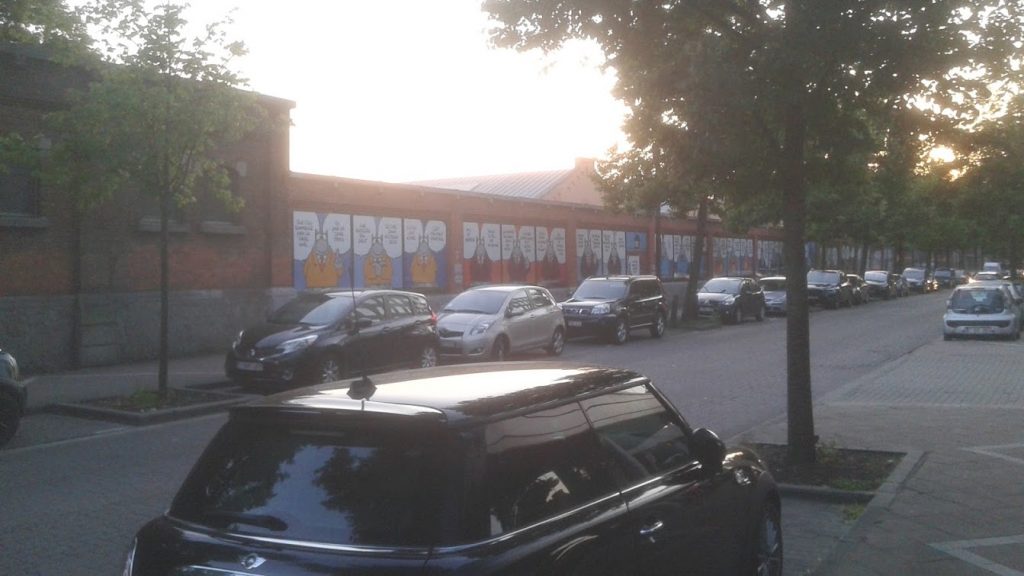 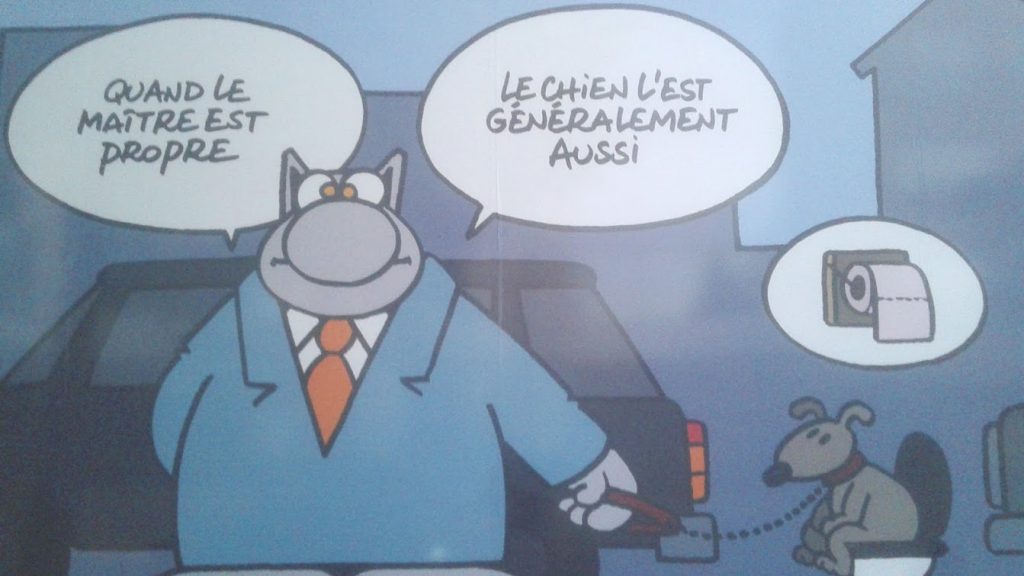 When the owner is clean, the dog generally is too. 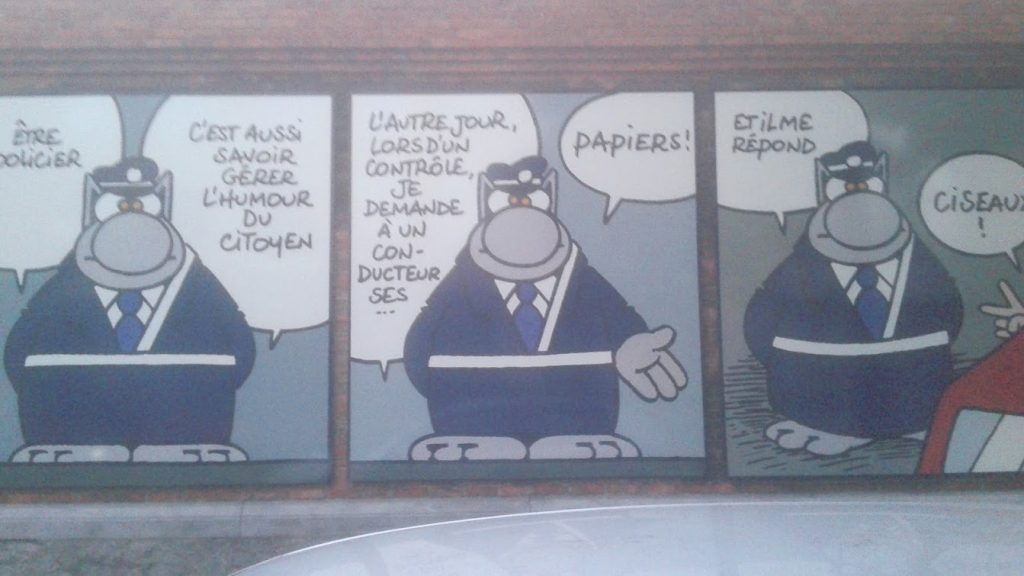 Playing stone, paper, scissors when the police asks for your papers. 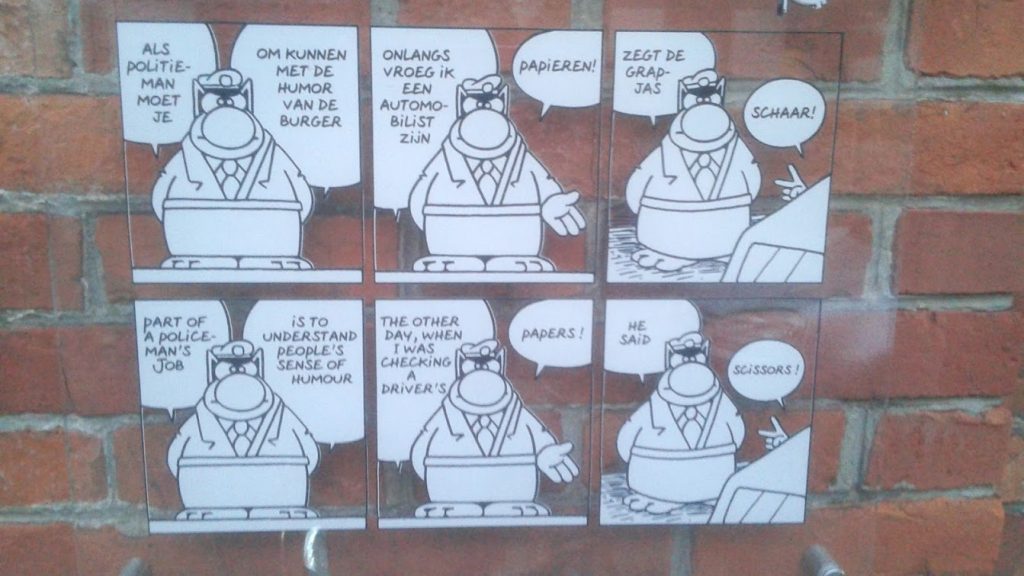 Translations in Dutch and English. 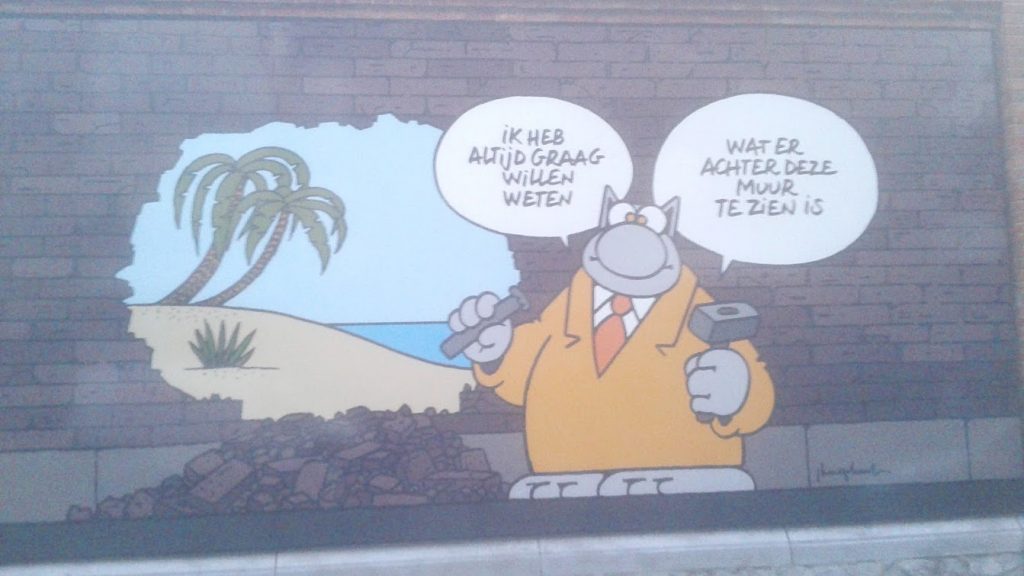 I always wanted to know what’s behind this wall. 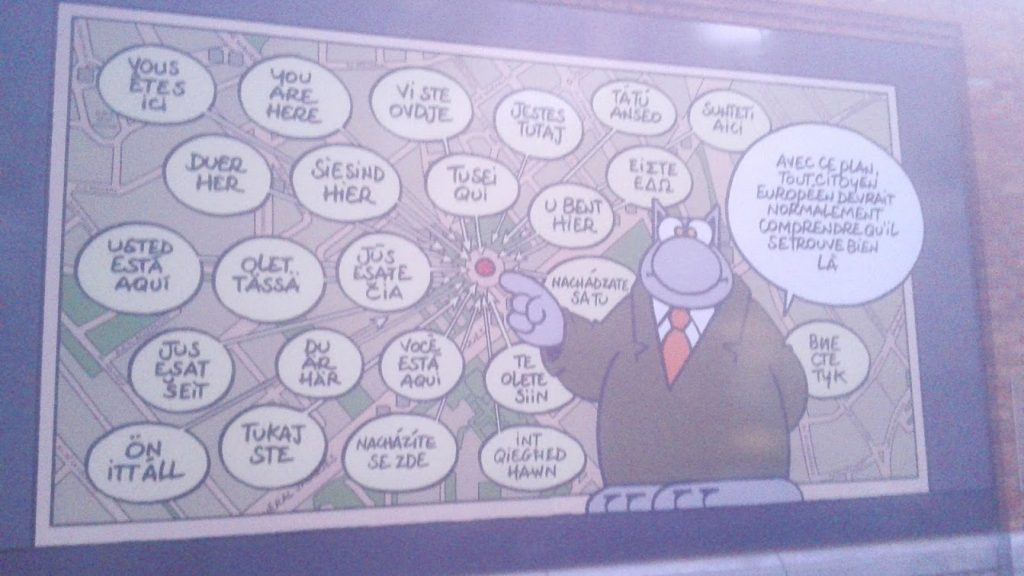 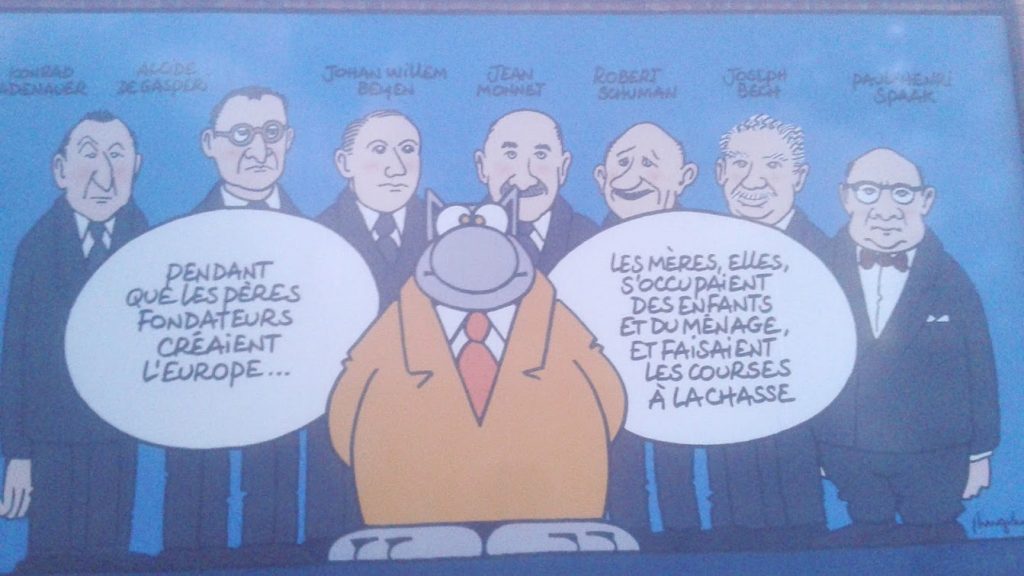 This one will piss off the feminists among you. 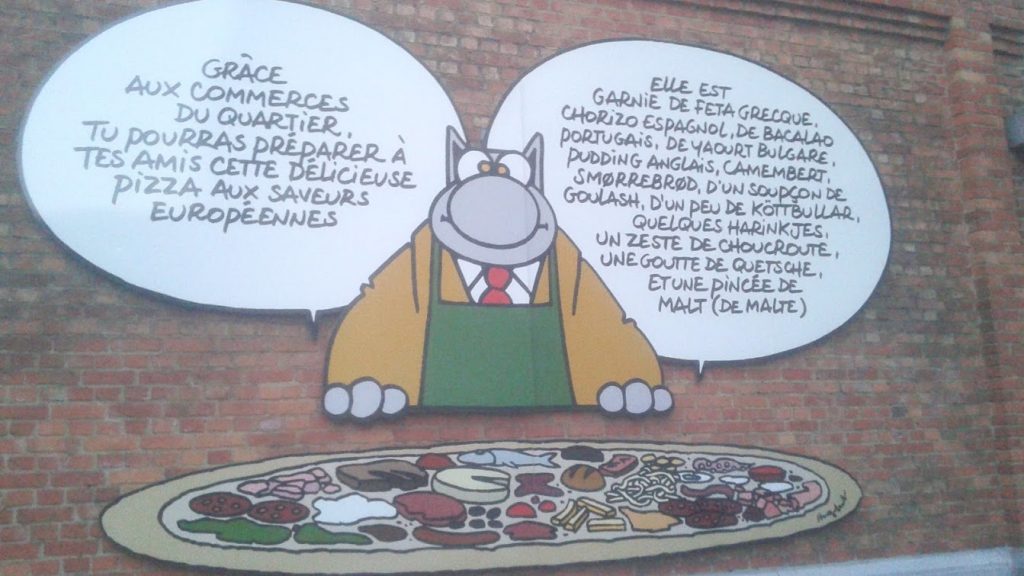 Another plus of doing bike rides during the evening is that, when tired or dizzy afterwards, the day is almost over anyway and I can go to sleep. I have not hit a really bad patch yet following these rides as I often take a nap beforehand. Quite to the contrary, after these rides it feels as if I might have taken away some of the stress of bright light and near point tasks I try to do during the day. As long as I keep it playful and don’t lapse into competitive distance tracking or score keeping, this might remain to be the case. All in all, moderate eye and body movement seems to be the key to developing more eye movement technique, accuracy and endurance so I might as well make it a little bit more adventurous!

During one of my last VT appointments, Sofie off-handedly  remarked: “What’s left for you is fine-tuning but that may also be the hardest part.” I can’t help thinking about that. It’s true that I’m still most comfortable with visual capturing exercises. Even biking is more about capturing visual imagery and moving through space than interacting with objects. The activities that generate most strain and frustration with me are close range activities, requiring ocular convergence combined additional manual manipulation of objects and other cognitive demands. Such as, for instance, writing this blog post. We’ll see how hard the fine-tuning turns out to be. Can’t imagine it being harder than what already has gone before though. Just have to be patient, try to buy time and build that developmental pyramid without skipping the essentials.