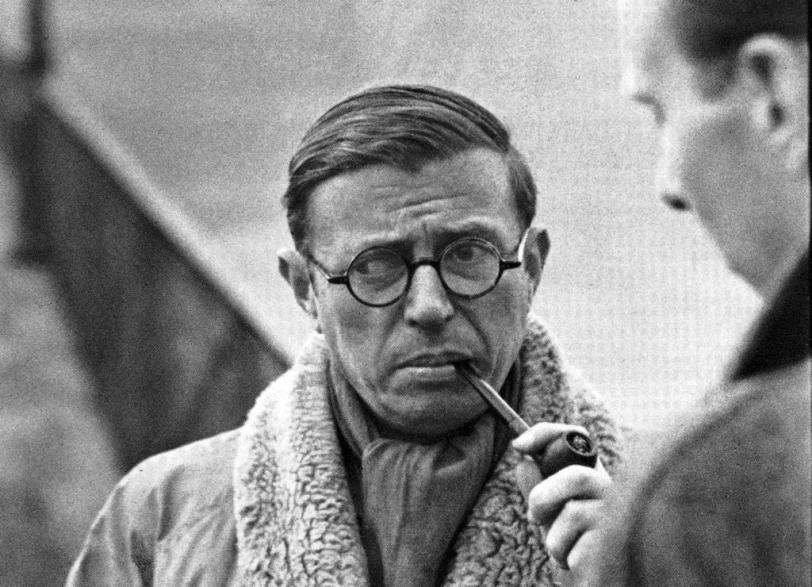 I usually don’t simply repost material from other blogs but I wanted to preserve these snippets about Sartre in my records. Many thanks to Dr. Leonard Press from the Vision Help Blog for sharing this information. In his blog entry, he refers to a book called “At the existentialist café” by Sarah Bakewell.

In tracking the birth of modern existentialism to the Bec-de-Gaz bar on page one, Bakewell jumps right into Sartre’s misaligned gaze:

“The one who later told the story in most detail was Simone de Beauvoir, then around twenty-five years old and given to watching the world closely through her elegant hooded eyes.  She was there with her boyfriend, Jean-Paul Sartre, a round-shouldered twenty-seven year-old with downturned grouper lips, a dented complexion, prominent ears, and eyes that pointed in different directions, for his almost blind right eye tended to wander outwards in a severe exotropia or misalignment of the gaze.  Talking to him could be disorienting for the unwary, but if you forced yourself to stick with the left ye, you would invariably find it watching you with warm intelligence: the eye of a man interested in everything you could tell him.”

Sartre’s exotropia is reported to have conferred benefits to him on more than one occasion.  First it exempted him from frontline combat when he was drafted into the French army in 1939. It then spared him from forced labor as a prisoner of war after the Germans invaded France in 1940.  Ultimately it proved to be a blessing in disguise by providing an avenue for escape.  Bakewell continues:

“He had been suffering a great deal from his eye problems thanks to all the reading and writing – which were mostly done one-eyed.  Sometimes both eyes were so sore that he tried to write with them closed, his handwriting wandering over the page.  Pleading the need for treatment, he procured a medical pass to visit an ophthalmologist outside the camp gates.  Amazingly, he was then allowed to walk out, showing the pass, and he never went back  …  The blessing came at a cost in the long term: exotropia can cause a degree of tiredness and difficulty in concentrating that may have contributed to his destructive tendency to self-medicate with stimulant drugs and alcohol in later times.”