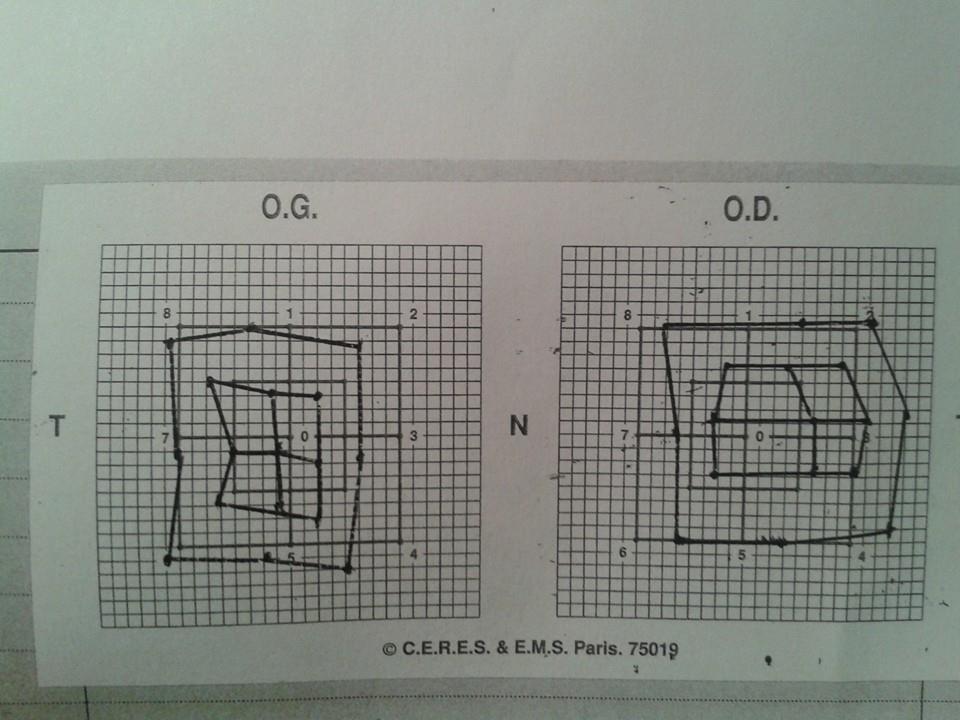 The Hess Test involves anaglyph glasses and a grid attached to a wall or screen in front of the patient. The purpose of this test is to get an idea of whether or not the eyes align absent of any exterior reference points and thus without any compensation ability the patient might usually be employing. 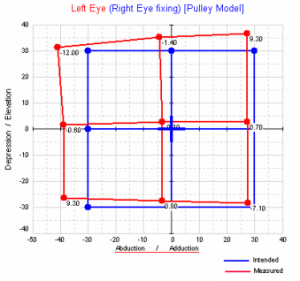 During the test the patient is wearing anaglyph glasses while watching the grid. Somewhere within the grid a red light will illuminate itself or will be projected by the clinical assistent. The patient has a green laser pointer in his/her hand and needs to point it at the spot where he/she perceives the red light. If to the clinical assistent, and in real space, the lights are superimposed, the patient is aligning the eyes correctly. Because one eye only sees the red dot and the other eye only sees the green dot, the patient might perceive the dots to be superimposed without this being the case in real space. In that case, the eyes are misaligned.  The misalignment will be apparent to the professional administering the test and this will documented on paper.

This was my Hess Test result of March 13th, 2009. This was only five or six months after a disasterous eye muscle surgery. The surgery had to be redressed to some extent a few months later with another surgery by another doctor. 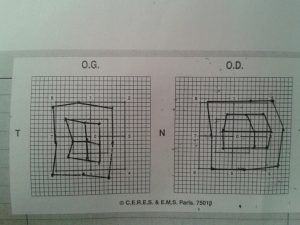 Evidently the surgery completely destroyed eye teaming and my ability to deploy any of the neurological adaptations to strabismus I previously had. This picture makes it very clear in a tangible and visual way how strabismus surgery wraped my visual space making it very difficult to navigate that space.

The test is often administered prior to eye muscle surgery to get a better idea of how well the patient performs in all directions of gaze. Obviously this information is equally useful in figuring out which binocular weaknesses need to be emphasized addressed during Vision Therapy.

Beneath is the result of a Hess test done more recently (June, 2016). Things seem to be moving in the right direction. What’s more important than whether or not all the points perfectly intersect with the printed grid is the shape of the drawing. For instance, if the box has the same shape as the printed box but consistently one length to a certain direction, that can easily be fixed with prism. More worrisome is the compression of the box on one side and the more stretched rectangular shape on the other side. That’s the thing that makes it hard to manage because the angle of deviation is constantly shifting without much of a systematic order to it.

On the bright side, the results of my Hess tests are changing, are becoming more regular and the vertical deviation is lessening. Things are moving at a very slow speed but ultimately time is on my side.

Here are some more illustrative youtube videos on the Hess Test to get a better idea of how it’s done. Nowadays electronic versions of the Hess Test are also available.