How much as the strab-business might stink, there has actually never been a more hopeful time for strabismics. Neuroscience and technology are maturing to a level at which it is possible to introduce 3D technology and touch screens into the treatment of binocular problems. Thanks to a VT friend of mine named Aaron I learned how to install real games and more importantly apply 3D visual outputting to them. Because of my visual problems I had to let a lot of my geeky pursuits go in remission but stuff like this sure does revive my enthusiasm. I will try to explain how to get this stuff running on your computer for Windows users (although it must be pretty similar for other platforms I reckon).

Visual requirements:
I would say it is advisable that you have sufficient motor control over your eyes as to align them while playing the game. I have reached that visual level now and use the game to achieve better anti-suppression, more sensory fusion and hopefully in time some stereo vision. Aaron said it greatly helped him improve his stereo skills because it is engaging and the graphics are nice and more outspokenly 3D than real life experience. Combining business and pleasure is what we are going for here, as a complaint of VT patients often heard is the tediousness of VT procedures. Although boring repetition is certainly necessary while building very basic visual skills it is nice to add some juice to the mix later on. Depending on your level and your own feel you will know whether it’s too soon or not.

The game Aaron proposed is called Trine 2. It has two advantages:
– It’s not a first person game, meaning that you are looking at your character from the side. In my opinion it allows for more relaxed gaming and more time for your vision to adapt. Remember that you want to reap a double benefit: perceptual learning and some fun without overwhelming your vision completely. Being killed from the side seems more zen than having it done to you head on. Attacks on your person in first person might leave you more frustrated with your visual skills than anything else. On top of the side view, the game is set in a mythical environment with dreamy music in the background which also helps.
– It has a free demo!

How to get the game to play in 3D?
There are many different kinds of 3D technology which are all intended to supply each of your eyes with a slightly different image. The one that is cheapest and doesn’t require extra tech equipment is red/cyan based 3D. The only things you need are very low cost red/cyan glasses and a 3D driver on your computer capable of outputting red/cyan graphics. 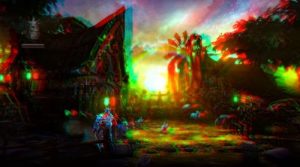 For you to know which 3D driver you can use, you need to find out what kind of video card your computer has. Learn how to do that here.

– If you have an NVIDIA video card it is possible your computer already has standard 3D support. Go to the NVIDIA control panel to check out the keyboard shortcuts. Normally CTRL + T will enable stereoscopic viewing if the game supports it which, in the case of Trine 2, it does. If 3D is not supported by default you can download a 3D driver designed by NVIDIA to go with your particular video card.

– In case you use an Intel HD Graphics solution (or other) you can download the iZ3D driver here. Select Anaglyph and download the driver.

Once you downloaded and executed the software it will show you the keyboard shortcuts you need to turn on and adjust the 3D graphics according to your needs. More divergence, more convergence… Whatever is most comfortable for you to start building more visual skills and better fusion. In case you only see red or cyan, you are suppressing. In my experience movement helps with anti-suppression and so it is too in playing this game.

If you get tired of playing the free Demo you can buy the game for a few bucks. In any case, this allows you to try 3D gaming at virtually no cost if you already have a pretty good computer. Cart board glasses and that’s it basically.

I hope this explanation is clear enough in order to make 3D technology accessible for visually impaired people. The result of your endeavors should look like this: