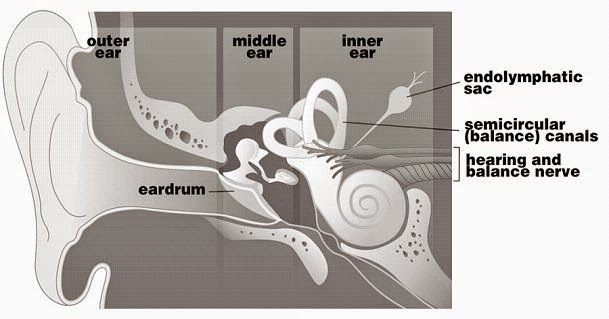 What is Ménière’s Syndrome?

(Taken from the book ‘Vision Rehabilitation‘.)

“The etiology of Ménière’s syndrome is not completely understood but is considered to be idiopathic (meaning the cause is unknown) endolymphatic hydrops. Symptoms occur when excessive amounts of endolymphatic fluid swell the endolymphatic space in the membranous labyrinth. Onset is typically spontaneous with symptoms of severe rotational vertigo, fluctuations in hearing, tinnitus, and aural fullness.

Intervals between episodes are symptom- free and may be days, weeks, months, or years. Triggers may be stress, fatigue, changes in barometric pressure, some foods, excessive dietary salt, or by other illnesses. When the initial episode of Ménière’s occurs following TBI, it is identified as posttraumatic Ménière’s syndrome.

It is uncommon and symptoms may not be manifested for weeks or months or years after the injury. Hamid reported that a diagnosis of Ménière’s syndrome is “certain” in the presence of
(1) two or more spontaneous episodes with rotational vertigo for 20 minutes or longer,
(2) audiological assessment showing hearing loss (unilateral or bilateral), on at least one occasion,
(3) tinnitus or aural fullness reported in the affected ear,
(4) other etiologies were excluded (i.e., vestibular schwannoma), and
(5) histopathological findings in the temporal bone.

Treatment begins with a trial of medical management with diuretic therapy and a restricted sodium diet (2000 mg/day). During severe episodes of vertigo, diazepam (antianxietal), or meclizine (antihistaminic vestibular suppressant) may help. Abstinence from alcohol, nicotine, and/or caffeine can be beneficial. Studies involving intratympanic injections of gentamicin (an ototoxic antibiotic) are exploring other methods to relieve severe vertigo. However, vertigo may be relieved but some hearing loss could occur. Vestibular rehabilitation can be beneficial for teaching the patient to use movement and balance strategies. Prognosis may be good with early identification and treatment. If aggressive medical management fails, a final resort involves surgery to destroy vestibular nerve tissue or to prevent vestibular signals from going to the brain.” 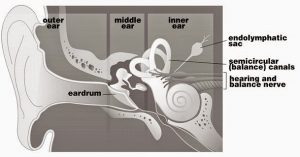 It just so happens that a little while after reading about Ménière’s that I met someone suffering from this syndrome over the internet. She likes her privacy so she won’t be mentioned by her real name. Let’s call her Hillary for sake of simplicity.

Hillary is 56 years old and lives in Minnesota. Because she suffers from Ménière’s, a vestibular disorder, her Vestibulo-Ocular Reflex is impaired. She has nystagmus, balance, posture and gait problems. She has tried to do gaze stabilization through vestibular therapy but it hasn’t worked as well as she wished. That is the reason why she is exploring the workings of human vision and visual rehabilitation. Here’s an excerpt of a conversation I had with Hillary.

HILLARY: When I was in Vestibular Therapy, I noticed during the gaze stability exercises how much my jaw, neck and shoulder muscles worked harder to keep my head steady. It was contributing to my vertigo. It felt like I was trying to thread a needle on a moving train.

While watching your short videos demonstrating your eye movements, I think I noticed this in you too . The forehead muscles or the jaw muscles moved first, then the eye followed – the other body muscles try to help get the eye on task.

I think part of the problem is that you are holding the fixation target (the pen) yourself. An OT suggested that I find an old-fashioned desk pen holder so I don’t use my other postural muscles to complete an ocular fixation task. The idea is to keep the jaw, neck and shoulder muscles out of the equation

I try to develop static postural control and keep my head in the same plane in space while moving my eyes independently. Maybe that is similar to focusing on your eyeglass supports as you do in the beginning of the video. It’s more static – you aren’t including any micro movements from you jaw, neck or shoulder muscles.

MICHAEL: You are quite the observer! Amazing! The ‘thread a needle on a moving train’ metaphor is very spot-on too! One of the biggest problems I experience because of the remaining Convergence Insufficiency is the cramping up of my left jaw while reading or trying to read. After a relatively short amount of time I usually have to stop because of jaw pain. Then I have to ‘unwind’. The pen holder might be a good idea. How did Vestibular Therapy turn out for you?

HILLARY: Vestibular therapy helped somewhat. I have fluctuating symptoms (Ménière’s) so everyday is unpredictable. I’m working on gaze steadiness now. Six years ago, if I were to direct my eyes upward, I would fall down.

MICHAEL: Ha, I read about Ménière’s syndrome recently. I’m sorry to hear you had such a hard time. Do you have any idea about what caused Ménière’s in your case?

HILARY: Ménière’s is idiopathic – which means they don’t know the specific cause. I’m sure mine was caused by a series of genetic and environmental triggers. One ear has a slow-draining tube then add to that several ear infections as a child, allergies, a poor functioning immune system, etc. I had several Meniere’s episodes – maybe one a year – from age 20 to age 35. Episodes became more frequent after that. I think I was diagnosed around the age of 40. The average age of diagnosis among Ménière’s patients seems to be in the 4th decade. There were only a few doctors in my area that had the equipment and experience to diagnose this condition.


MICHAEL: Wow, I see. That puts a perspective on things… Clearly our situations are different but I identify with the unpredictability even though I don’t suffer from Ménière’s exactly. Taking naps does somewhat help for me. Do you experience Tinnitus (perception of sound when no external sound is present)?

HILLARY: Tinnitus! Yes, it would drive me batty. I did TMJ exercises and can now modulate it down from a roar to a hum. I think part of controlling the Tinnitus has to do with controlling blood flow pressure.

MICHAEL: Honestly, I don’t know what TMJ means but congrats for making such great progress! Gosh, you have been fighting your way through A LOT of sensory attacks!

HILLARY: TMJ stands for temporomandibular joints. Clenching the jaw can reduce blood flow to ear. Hearing damage and some medications can cause it too. I wear my earplugs often in loud places as a prevention measure too.

Before I understood how much eyes and vestibular are connected, I would think of the British women who learned to still hang out the wash in between the World War 2 bombs because “Monday is washing day.”

A lot of reducing the anxiety of unpredictability is establishing whatever predictability you can muster. That’s one reason I try to “anchor” the object I am trying to see.

MICHAEL: I like the World War 2 anecdote. I often felt like that. Whatever came down, you have to try to keep calm and carry on.

Understanding the problem itself helps a lot though. So there’s that. Gradually stabilizing my visual world is helping to take a lot of that uncertainty away. External problems are relatively easy to overcome when you have mastered the internal neurological problems. I’m very glad I posted the videos and got your insights, Hillary. Thanks a lot!

HILLARY: After fifteen years of vestibular and physical therapy, I learned a few things! I enjoy your writing very much and thanks for sharing the video! Now I’m typed out because it takes a lot of effort for me. While some activities are invigorating mentally, they can be very taxing neurologically later on. I’m sure you understand. Talk to you later!