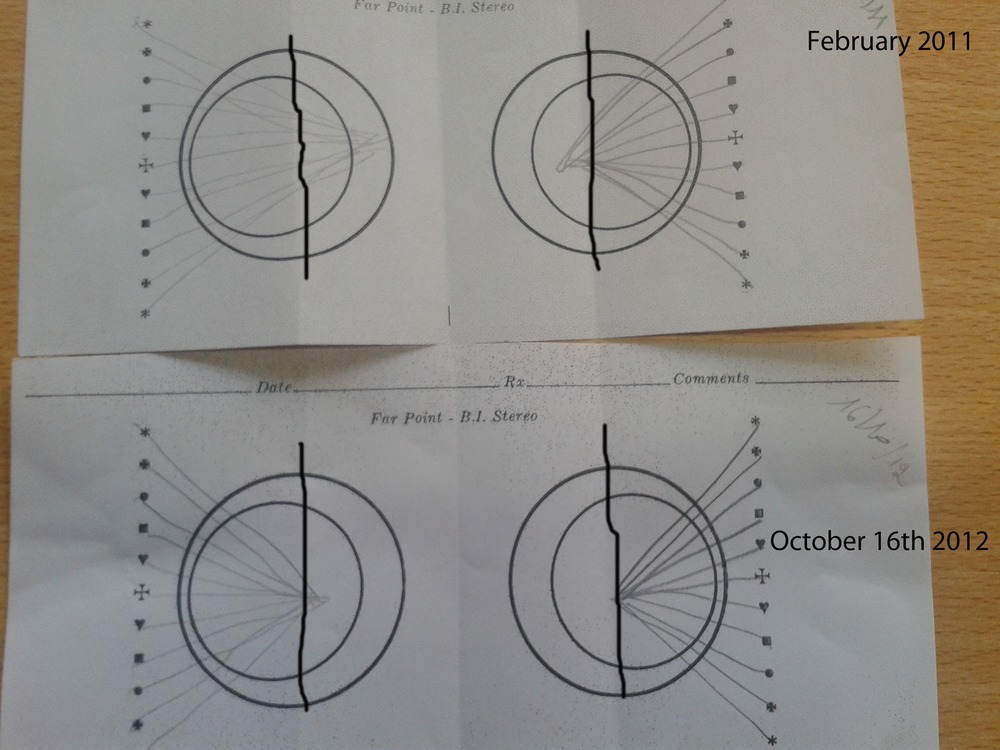 Last week I was a bit sick and nothing seemed to work but this week things seem to be better. Sometimes it would just be easier to be a robot and shut down the stream of consciousness, wouldn’t it? Either way it’s better not to accumulate too many diseases at once. 😀 In today’s session we did some of the usual stuff… The rotoscope, balancing on the rail with various prism glasses and one exercise we did a few times before. This exercise consists of standing upwards, looking though some kind of holder at eye height and connect the dots. As simple as that! But there’s two problems with this. First, the holder is made for small people, probably children, and can’t reach my eye height. Second, the whole thing is an illusion so your pencils are never actually going to touch. Then again, the whole concept of 3D vision is about a healthy kind of illusion. 🙂

We did this a couple of times before and you can see the differences in the drawing. To me this is pretty spectacular because I don’t feel myself changing on a day to day basis, even though I am. Being the geek that I am, I produced some evidence.

My cheiroscopic pencil drawings are supposed to be symmetrical and stop at the fold in the paper that I indicated with a black line. Clearly, advanced Photoshop skills were used for this manipulation. In February 2011 I obviously transgressed that line due to bad eye positioning. Today the result was much better.

Last but not least, I got a new toy to play with at home called an Aperture Rule. It’s not just for little girls but I’m pretty sure she is better at it than I am at this point. 🙂