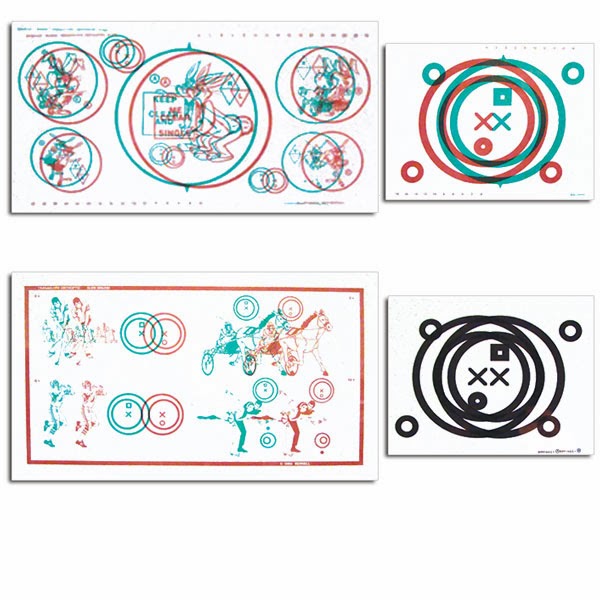 Our senses are inferential by nature. This means that our senses pick up on different kinds of stimuli and the brain infers a meaningful percept. Probably there’s an objective reality out there but that is not what we perceive. Colors don’t really exist in nature for instance, they are just distinct wave lengths of light interpreted by our brains as color. Probably because it is highly useful in finding food and recognizing predators.

If a tree falls in the forest and no one is there to hear it, does it still make a sound? No, because sound is something constructed by our brains by using the pressure wave input received by the cochlea. The waves are still there but it doesn’t make any sound if there’s no brain to generate the perception of sound.

You get the idea. The brain picks up on different kinds of signals through our senses and assembles one consistent subjective percept of our environment. Now wrap your brain around the following anecdote.

Inferring anaglyph depth through touch
Tranaglyphs (transparent anaglyph) are transparent plastic cards used in combination with red green anaglyph glasses. One of the cards depicts a red image and the other a complementary green image. If you combine them with the glasses a normally sighted person would perceive one single 3D image. 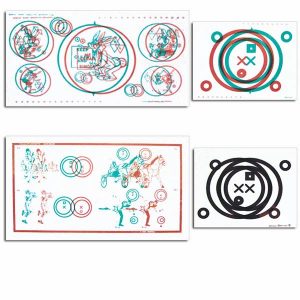 I couldn’t find the one we used in the office online but it is similar. It was a boy with two balloons, one in each hand. He’s just been standing there annoying me over the last three years. By now I can fuse him and he’s single which is great. (I just realized how wrong that sounds.) I’m not getting any luster glow but I can move my eyes to keep him single as my therapist moves the cards in the holder. So far, so good. This time we tried something new. She said ‘Try to touch the little guy’s head with your finger and stop where you feel he should be’. It sounded like a pretty absurd idea. Obviously he’s right there on the bloody card. I did it and I stopped where I felt he should have been if he wasn’t on the card. It’s a weird feeling. It feels like something is not adding up. Then she said ‘Now try touching one of the balloons’. I did and I immediately knew that the balloons were supposed to be farther away then the little boy. To my surprise it was the correct answer! I can hack my vision and infer depth in stereograms by trying to touch the portrayed objects in thin air. The interaction of my senses is telling my brain something about the depth I should be seeing but I’m not SEEING it. I must be getting close. The position of my eyes and their movements must be getting more integrated with the rest of my body and its movements. During my last check-up I also correctly guessed the answer to a stereogram. Maybe the back door is being opened and I’m in for a serious brain fart in the near future. Probably I should just relax and let biology do its thing.Added notes: Apparently merely intending to interact or to reach out to a target can change our perception. To learn more about the complex interaction between action and perception see: http://en.wikipedia.org/wiki/Two-streams_hypothesis. The dorsal ‘where’ stream often bursts the ventral ‘what’ stream its bubble when preparing to interact with a target to make our perception more suitable for that action. It’s funny how this knowledge becomes a lot more real with first hand experience.

Definitely not dyslexic
Most people associate reading difficulties with the word ‘dyslexia’ whatever that means. Dyslexia must have good marketing. I looked it up on the internet and there’s all kinds of vague and inconsistent definitions. Reading is a very complex process so I’m sure a lot can go wrong. The thing is to figure out what is keeping that particular person from reading adequately. The only book I have read somewhat covering the subject beyond binocular vision is ‘The woman who changed her brain’. Binocular reading problems were called ‘motor symbol sequencing deficits’ and was the most common reading bully. The other two were a Broca area deficit (auditory speech) and a symbol recognition deficit. I figured if dyslexia did not refer to eye teaming problems it would probably refer to the inability to recognize letters quickly and infer meaning. After doing that internet search, I’m not so sure anymore. The paragraph should probably be called ‘definitely not symbol recognition deficient’.

Here’s how I know I don’t have a symbol recognition deficit. My Vision Therapist uses a customized computer program enabling her to test certain things and then send me downloadable exercises based on those tests. All of them partly in red and partly in green of course to make them anaglyph compatible. Eccentric circles are a classic but lately we’ve been mixing it up with more game like exercises. Nothing too exciting but I have a tolerance for boring stuff as long as it serves a purpose. One of the most recent exercises is one that tests and trains ‘visual capturing and memory’. The program displays a number of symbols during a fraction of a second and then you have to reproduce it by memory. Some people apparently find this hard even for very recognizable words. When doing this exercise with actual words my tests scores are impeccable. I think this must be one of the ways I compensated for unstable eye movements. You don’t get much time or much stable vision so you have to infer a lot from what you do get to see when reading.

Interestingly the program allows you to do the exact same exercise with random red green combinations of five unusual symbols (cross, star, square, rectangle, circle). Then you have to reproduce them by clicking on the right symbols in the right order. Man, do I suck at those. Goes to show how trained we get at recognizing words. I’ve been doing that exercise for a while now but improvement is slow. I think I can only really focus on three or four of those symbols at once and try to make a quick saccade to see the fifth. But there’s no time! I should be trying to get more of them into my visual field so I can capture them at once.

As far as actual reading is concerned, my new year’s resolution has been to try do more bar reading. It’s a crucial exercise for getting over the residual Convergence Insufficiency and improve fine eye motor skills and ultimately reading skills. I’m putting in the time and the work. Results will follow. All these basic vision skills I’ve been working on for so long are coming together. I’m excited to be so close to improved reading. 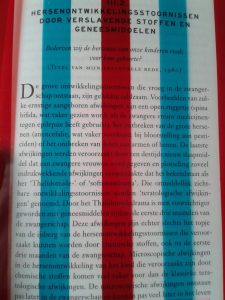 Soupy air
In summer, when cars are being punished by extreme temperatures you can see the heat waves bouncing off their roofs. It seems that’s a pretty common perception  so I will use it to explain the feeling. This time of year it seems unlikely that heat has anything to do with it though. During recent weeks I had a couple of moments of ‘soupy air’. It’s hard to describe but it’s like those heat waves are bouncing off of people or things for brief moments. Something that seems to trigger it are stripes. Striped shirts, floor radiators and even train tracks… Maybe it’s just a coincidence and the lines have nothing to do with it. But that must be one huge coincidence then. I don’t know what to make of it… Glimpses of depth? Palpable space? Perhaps.